After IDF row, Shin Bet clarifies that it 'didn't warn of July war in Gaza'

Shin Bet seeks to calm tensions with army in wake of Channel 2 report that military and political leaders had disregarded its warnings of Hamas plans to provoke major conflict with Israel.

In an attempt to calm rising tensions within the defense establishment following a report that the IDF had disregarded a Shin Bet warning about Hamas intentions ahead of the summer conflict in Gaza, the Shin Bet issued a statement Thursday morning emphasizing that it had not raised the alarm about any Hamas intention to launch an all-out war against Israel in July.

According to a report by Israel's Channel 2 television, Shin Bet officials claimed that they had raised concerns with the political echelons as far back as January, regarding early signs attesting to Hamas preparations for a conflict with Israel. IDF chief Benny Gantz reacted furiously to the report, writing to Prime Minister Benjamin Netanyahu that the Shin Bet officials who had made the claims had "breached every moral and ethical standard."

The Shin Bet officials said their reports had continued to pile up, ignored, and that in April Shin Bet chief Yoram Cohen presented Jerusalem with warnings of a wide-ranging strategic terror attack that Hamas was planning to execute within the coming few months, by sending its militants through a tunnel from Gaza to into the Israeli border community of Kerem Shalom.

The Hamas plan aimed to result in massive Israeli casualties and the kidnapping of IDF soldiers. Cohen's presentation included the Shin Bet prediction that such a singular event would immediately change the military reality on the ground.

But IDF sources claimed no warning of a potential conflict had been received from the Shin Bet, either in winter or spring of 2014. Defense officials said the clash on the matter erupted between Cohen and Military Intelligence director Aviv Kochavi during a cabinet meeting at the close of Operation Protective Edge in late August.

"Information passed on by the Shin Bet, beginning in January 2014, pointed to the start of Hamas preparations and training ahead of a possible conflict with Israel. It is important to note, however, that at no point did Shin Bet officials, including the interviewees in the story, say that the Shin Bet had alerted, in light of this information, to a war against Hamas in July," the Shin Bet statement said.

The Shin Bet stressed its alerts pertained to Hamas intentions to commit a large-scale terror attack that could lead to a military campaign.

The interview given by Shin Bet officials to the "Uvda" (Fact) television show enraged IDF Chief of Staff Benny Gantz, who then wrote a letter of complaint to Prime Minister Benjamin Netanyahu, asserting the show had portrayed the IDF and political echelon as choosing inaction in the face of Shin Bet warnings. 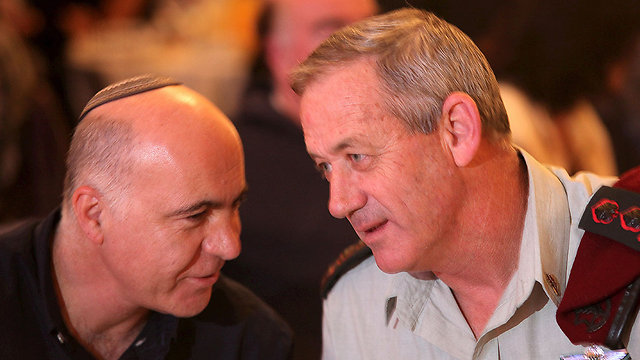 Below is the letter, obtained by Ynet, which Gantz sent to the prime minister.

In the 'Uvda' television program, Shin Bet officials breached every moral and ethical standard. This is a deep expression of the lack of inter-organizational collegiality, and crosses a red line. The show presented tendentious information, which misrepresented the Shin Bet as the sole intelligence agency in the Gaza Strip, who performed diligently while the rest – the intelligence branch, IDF, and political echelon – were paralyzed.

I firmly assert that the Shin Bet did not issue a warning that Hamas intended to launch a war in July as a deliberate and definite matter. The issue of the war or potential campaign was never presented in any discussion that I headed, and there was certainly no discussion in early 2014 regarding an impending war, in either military or political circles.

The Shin Bet's cooperation with the television show, which glorified the service while defaming the political leadership, is a moral and ethical lapse.

The IDF was accused of inaction despite information passed by the Shin Bet, to which I must express my strong protestation. This incident must be thoroughly investigated.

I regret that we have reached this point, but I must draw a line. In my opinion, the Shin Bet's disclosure of the intelligence possessed by its people, and the methods it has adopted, set a dangerous precedent, and it remains unclear who approved this scandalous admission.

In response the letter, on Wednesday afternoon the prime minister hosted Gantz and Cohen in his office. Netanyahu instructed the two men to refrain from publicly debating matters that should be resolved between security forces.

"We all have a national responsibility for Israel's security, and we must continue to fully cooperate for the sake of citizens' security," said the prime minister.