Tibi at al-Aqsa: 'We own this place'

Arab MK visits Temple Mount despite calls to calm tensions; worshippers tell Tibi he is 'better than all Arab leaders in the world.'

Despite calls to calm tensions in Jerusalem and at the Temple Mount, Arab MK Ahmed Tibi (UAL-Ta'al) arrived at al-Aqsa mosque over the weekend delcaring: "We own this place."

He was received favorably by Muslim worshippers who told him he was "better than all the Arab leaders in the world."

Tibi was treated like a hero on his visit to the holy site. Worshippers told Tibi he was a great Arab leader "because of your strong positions." He has visited the site several times during the recent period of tension. 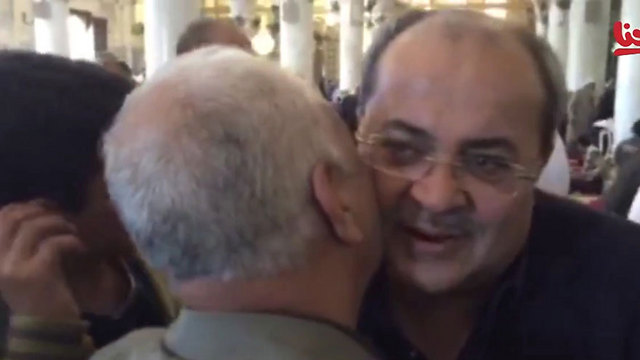 Ahmed Tibi viists al-Aqsa mosque despite calls to calm tension. (Photo: YouTube)
Tibi visited the European Parliament two weeks ago in order to express what he said were Israeli violations at al-Aqsa mosque.

He claimed that some Israeli politicians were "pyromaniacs that cannot be restrained" and said that "they inflame the situation in Jerusalem without thinking about the consequences."

He spoke of the situation at al-Aqsa and "attempts of Israeli sources to split the times of prayer."

The Arab-Israeli Knesset member called for European parliament members to implose sanctions against Israel in order to stop the continuation of settlement construction and said that Israel is a "democracy towards Jews and a state of racial discrimination against its Arab citizens."