11 families of US victims of bombings and shootings in Jerusalem seek $1 billion in compensation from Palestinian leadership for sanctioning and funding terror attacks.

Families of US victims of bombings and shootings in Jerusalem more than a decade ago have cleared a final hurdle to take the Palestinian Authority and the Palestine Liberation Organization to trial in New York for supporting the attacks.

US District Judge George Daniels in Manhattan largely denied bids by the Palestinian Authority and the PLO to dismiss the long-running $1 billion lawsuit ahead of a jury trial scheduled for January 12.

At a court hearing on Thursday, Daniels also reaffirmed his decision in 2008 finding that his court had jurisdiction over claims against the Palestinian Authority and PLO despite changes in law at the appellate level. 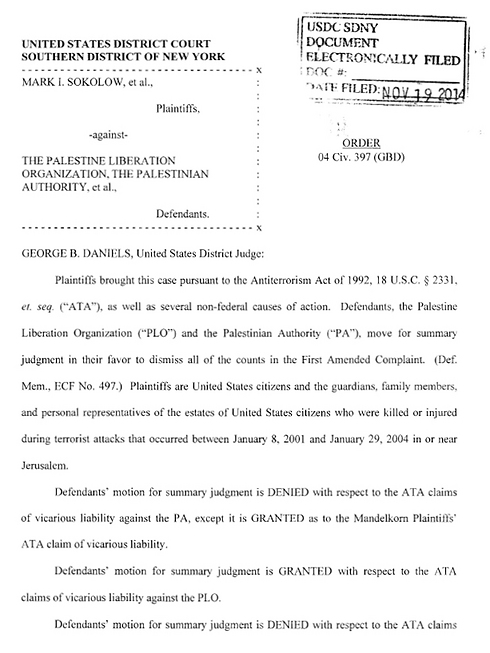 Mark Rochon, a lawyer for the Palestinian Authority, said in court his client was "considering whether to seek appellate relief on that issue." He declined to comment after the hearing on Daniels' other rulings.

Daniel's ruling on the dismissal motion was issued late on Wednesday.

The lawsuit seeks $1 billion on behalf of 11 families who say the PLO and Palestinian Authority provided material support and resources for seven separate attacks in Israel that killed and injured American citizens.

The families accuse the PLO and PA leadership in funding, planning and executing seven terror attacks and fire at Israelis in Israeli territory between 2001 and January 2004 in and around Jerusalem. These attacks led to the death of hundreds of innocent civilians and to the injury of thousands. 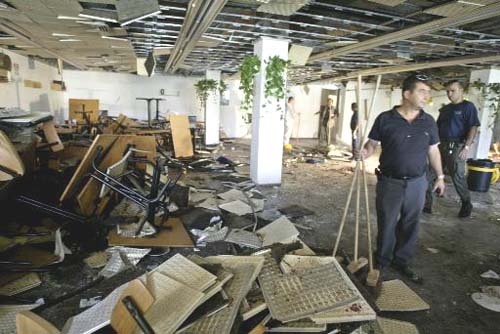 Scene of a terror attack at the cafeteria at the Hebrew University's Mount Scopus in 2002 (Photo: AP)

Among the terror attacks included in the lawsuit are the July 2002 bombing of a cafeteria at the Hebrew University's Mount Scopus campus that killed 9 people, including American students, and injured about 100; a terror bombing of bus 19 at the Rehavia neighborhood in Jerusalem, which killed 11 people and injured over 40; a shooting on route 443; a suicide bombing at the Ben Yehuda Midrachov, which killed 5 people, and others.

According to the statement of claims, the Palestinian Authority "planned and carried out terrorist attacks against civilians through their officials, agents and employees." 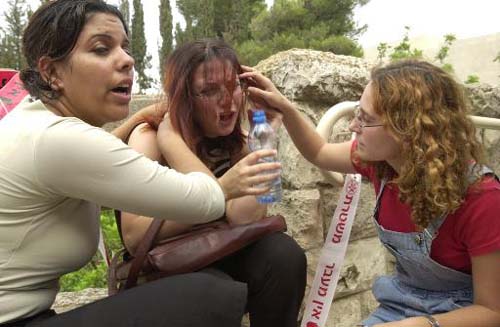 Scene of a terror attack at the cafeteria at the Hebrew University's Mount Scopus in 2002 (Photo: AP)

For the first time, the trial will be open to the public and to media reports in real time and evidence that have so far been confidential will be exposed. The plaintiffs claim this evidence is enough to prove the Palestinian Authority supports terror activity to this very day.

"We are looking forward to presenting the evidence to the jury," said Kent Yalowitz, a lawyer for the families.

The Palestinian Authority demanded to reject the suit due to lack of sufficient evidence, but the New York District judge ruled that the evidence brought before him were sufficient to call in a jury and issue a ruling.

Prosecutors interrogated a list of Palestinian Authority officials during the preliminary procedures, including Ahmed Qurei (also know as Abu Alaa), Salam Fayyad, Hussein al-Sheikh and many others. 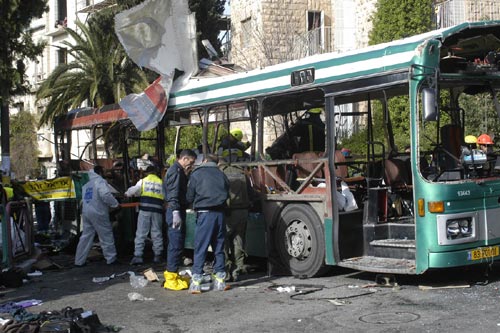 The scene of the terrorist bombing on bus number 19 in Jerusalem (Photo: Gil Yohanan)

Should the case go to a jury, it would mark a rare trial in a lawsuit under the US Anti-Terrorism Act. A federal jury in Brooklyn in September found Arab Bank Plc liable under the law for providing material support to Hamas.

The judge's decision allowing the case to go forward comes amid continued unrest in recent weeks in Jerusalem. On Tuesday, two Palestinians killed five people at a Jerusalem synagogue during morning services, the worst attack in the city since 2008.

The lawsuit, filed in 2004, accused the PLO and the Palestinian Authority of violating the US Anti-Terrorism Act through support of Hamas and the al-Aqsa Martyrs Brigades, which the US government deems terrorist organizations.

The Palestinian Authority has been battling the lawsuit since 2004 using prominent American attorneys.

In his ruling, Daniels said the plaintiffs had presented triable issues over whether the PLO and the Palestinian Authority directly supported Hamas and the al-Aqsa Martyrs Brigades with money, weapons and personnel, as well as by harboring purported terrorists.

The judge also said most of the plaintiffs could pursue claims that the Palestinian Authority was vicariously liable for its employees' alleged participation in attacks in 2001 and 2002.

Attorney Nitsana Darshan-Leitner, the founder of Shurat HaDin, which is leading this lawsuit and representing the families, said: "This is a precedent and a historical decision of the court. We've sued the Palestinian Authority in the past, and these suits were heard by different federal judges who ruled in them, but this is the first time a trial will be heard by an American jury, a trial that is open to the public and the world media. This is a historic opportunity to call to the stand many PLO and PA officials for an in-depth interrogation about their actions. The PA, the PLO and Abbas will have to answer to these actions."