Coverage of Israel should be accurate and impartial, but it's not

Op-ed: The reporting on the attack at a Jerusalem synagogue last week was only the latest example of ongoing and shameful phenomenon of misleading and slanted coverage on Israel.

On August 2, 1982, during the First Lebanon War, the front pages of the world's leading newspapers featured a photograph of a Lebanese baby bandaged head to foot. The caption under the photograph read: "A baby who lost both arms and was severely burned as the result of a bomb dropped by an Israeli airplane."

At a meeting in Washington, then-US secretary of state George Shultz showed the picture to his Israeli counterpart at the time, Yitzhak Shamir, and berated him, saying: "The symbol of this war is a baby whose arms have been amputated."

The image had a direct impact on the decision-makers, but the circumstances of the photograph and the caption were incorrect. The baby didn't lose its arms; it was lightly injured by a shell fired by the Palestine Liberation Organization.

The Western media's professional and ethical failure in their coverage of the murderous terror attack at the Har Nof synagogue was not a one-off slip. We are dealing instead with an ongoing and shameful phenomenon of misleading and slanted photos, captions and reports about Israel and the Palestinian-Israeli conflict, even among the most renowned media outlets that purportedly hold themselves to high professional standards. 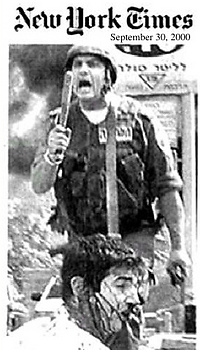 New York Times cover photo from September 2000. The bloodied youth is an American Jew being protected by the policeman.

On September 30, 2000, the front page of the New York Times displayed a photograph of a scowling Israeli policeman waving a baton, with a bloody youth kneeling on the ground at his feet. The caption below read: "An Israeli policeman and a Palestinian on the Temple Mount."

It turned out, however, that the young man was an American Jewish student who was beaten by Palestinians near Jerusalem's Mea She'arim neighborhood and was rescued by a Border Policeman. As far as the New York Times' editors were concerned, a picture of an Israeli policeman in front of a young man could not be anything other than the brutal beating of a Palestinian by an Israeli.

It should have come as no surprise, therefore, when in its report about the Har Nof attack, CNN captioned its interview with the mayor of Jerusalem: "Deadly attack on Jerusalem mosque" and in another piece counted the terrorists among the dead in a "terror attack". London's Daily Telegraph wrote: "Israeli police fired on Palestinians in a synagogue"; and Spanish newspaper El Pais reported six fatalities in Jerusalem, without distinguishing between terrorists and worshipers. 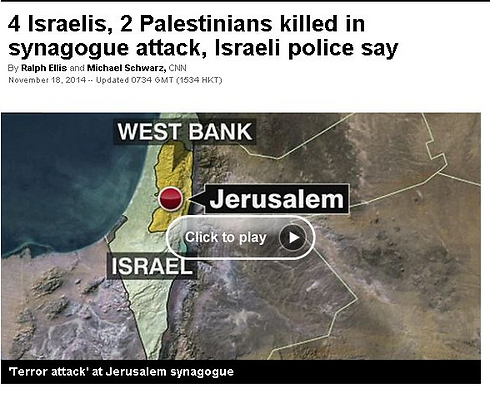 CNN coverage of the attack in Jerusalem: Terrorists included in the death toll.

The BBC news anchor who interviewed Naftali Bennett asked him not to display an image of one of the murder victims he was holding up to the camera, claiming: "We don't want to see that picture." Interestingly, the delicate BBC anchors had no trouble showing far more horrific images from Gaza.

One cannot argue that the recent mistakes and misinformation are simply the result of the information age, the social networking sites, and the pressure to release reports about rolling events as quickly as possible. We've witnessed them before, when there was no Internet, too, and they occur in one direction only – Israel's.

For quite some time now, the Western media's coverage of Israel has suffered from mistaken reporting, exaggerations, double standards, the unbalanced use of sources, baseless associations, ridiculous analogies, selective and tendentious interviews and significant omissions.

The shortcomings stem from a sense of solidarity with the "underdog," the adoption of the Palestinian-victim narrative, intimidation and threats on the part of the Palestinians, the widespread conflicting and critical voices within Israel, and anti-Semitism. From the perspective of the Western media, Israel alone is to blame for the absence of a solution and the violence.

This puts Israel in a very difficult spot; but its spokespersons must make more of an effort to demand a higher level of professionalism and responsibility from the journalists, and to denounce and shame them when they slip up. The Western media's consumers expect accurate, reliable and impartial reporting. They need to be shown that when it comes to reports they are fed about Israel, this is often not the case.