'The Wave' sparks questions among Arabs and Jews in Israel

Munich-based theater group arrives in Israel with play about a classroom experiment that went too far, as students become swept-up in Nazi-style ideolog. Jewish, Arab students watching play realize that 'No one is better than the other, we are equal. We are the same, with the same God, living in the same land.'

BAQA AL-GHARBIYE - By the end of their two-week tour, thousands of Jewish and Arab Israeli high school students, will have seen The Wave, a play about a classroom experiment that went too far, as students become swept-up in Nazi-style ideology. Based on a true story, the English-language play by ADG, an English-language theater group based in Munich, was warmly received by Israeli students, who all study English in high school.

In the play, teacher Ben Ross tries to motivate his high-school students by starting a new movement called The Wave, complete with banners, armbands and slogans. "Strength Through Discipline," the students yell, while offering a Nazi-style salute, "Strength Through Community," and "Strength Through Action." The movement gradually turns violent, with students beating up anyone who is not a member of the group. In one scene, Laurie, one of the skeptical students, confronts Ross and tells him, "Did you hear that a Jewish kid got beat up?" For the Arab students watching the play at the Al-Qasemi College in Baka al-Gharbiye, the "oppressors" are the Jews, while they, the Arab citizens of Israel, are the victims. While the 20% of Israel’s citizens who are Arab have full voting rights, they have long complained of institutionalized discrimination by the Jewish majority. The current political wrangling over a new bill to legislate Israel as the Jewish nation-state has only intensified these feelings.

The hundreds of Arab high school and college students crammed into the auditorium of the Al-Qassemi College in this Arab town in northern Israel followed the play closely. Although English is their third language, after Arabic and Hebrew, the students were clearly engaged in the action. 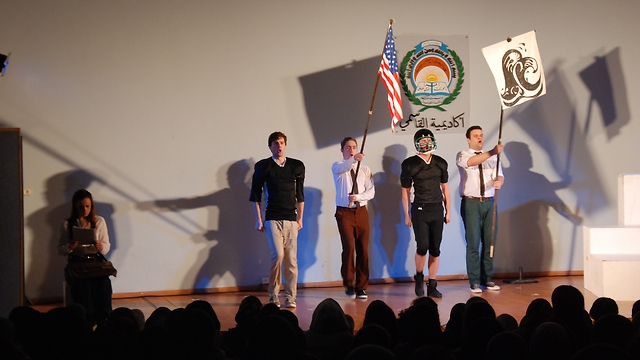 "I really enjoyed the play and despite the difference between our cultures, I got the idea clearly," Amir Qub, 16, told The Media Line. "God gave us a conscience and a brain to think, not just to follow anybody."

The play comes amid growing tensions between Israelis and Palestinians in East Jerusalem over the Temple Mount, a site that is holy to Jews and Muslims. Some of these students said the play made them realize that Arabs and Jews are fated to live together in the State of Israel.

"We’re living in Israel with Jewish people and we must look at them as human, not just a religion," Islam al-Faruja, 17, told The Media Line. "No one is better than the other, we are equal. We are the same, with the same God, living in the same land." 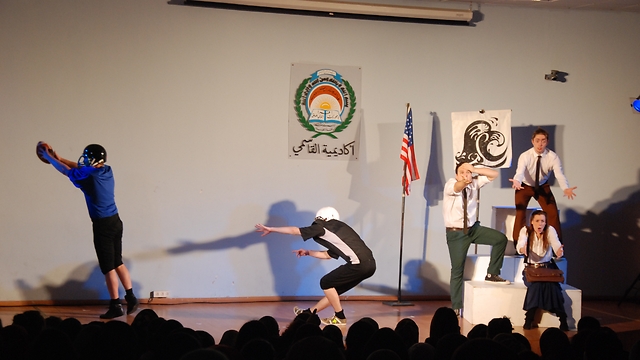 The play is partly sponsored by the US Embassy in Tel Aviv. Some of the performances are for Jewish audiences; others for Arab audiences; and some for mixed groups of Jews and Arabs. Many Israeli high school students read the book The Wave as part of their English curriculum.

The actors interact with the audience who participate in the show by becoming fictitious members of The Wave. At one point, almost all of the audience members were clapping along in rhythm during a Wave rally.

The play is emotional for the five actors as well, four of whom are making their first visit to Israel. The company is based in Munich, Germany and rehearsals took place there and in London. The show toured Norway before coming to Israel.

"I performed the same show with a different cast in Berlin," Jean-Paul Pfluger, who plays Ben Ross, told The Media Line. "At the end of the rally when I have the line, 'you would have made great Nazis,' it obviously means something else in Berlin."

The Holocaust imagery is also potent in Israel, where almost 200,000 Holocaust survivors make their homes. One member of the cast, Adam Pelta-Pauls, 24, who grew up in Potomac, Maryland, says it is an important piece for him. 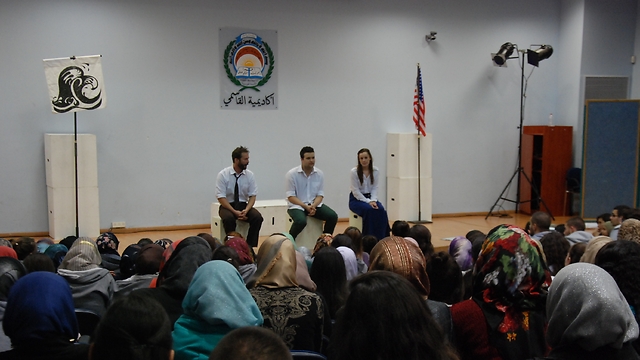 Photo: Dudi Saad
"My grandparents were both survivors and it made it really personal for me really quickly, especially rehearsing in Munich and close to Dachau where so many of my people were interred, lived and died in horrible ways," he told The Media Line. "It gave me a personal hand in making sure something like that doesn’t happen again. At the same time, we have to make sure it doesn’t happen again." Pfluger says that the theater offers a chance for Jews and Arabs to meet in a non-political space. "The whole reason we perform the show in Israel is as a means of a dialogue," he said. "A theater is a neutral space that can welcome both Arabs and Jews into the same space and hopefully it’s a really tiny drop in the ocean work towards some kind of resolution." Or you can take the reaction of college student Heba Younes.

"I think it’s an outstanding play, it was very awesome," she said enthusiastically. "The actors are really good and had so much emotion. I was shocked that it was a real story."