Oil spill said to be worst in Israel's history

The Environmental Protection Ministry said the Trans-Israel pipeline spill in southern Israel would cause landscape damage and could take months to clean up.

The Environmental Protection Ministry on Thursday branded the oil spill from the Trans-Israel pipeline in southern Israel one of the worst pollution events in the history of Israel, and said the clean-up operation will damage the landscape and could take many months. 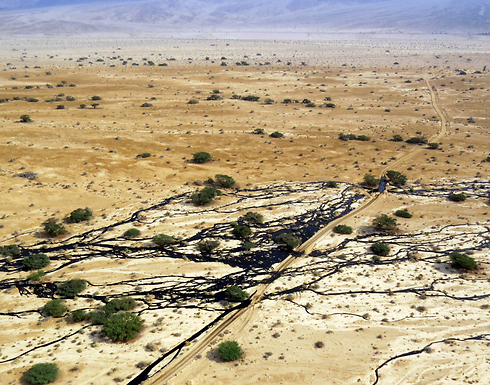 Millions of liters of crude oil spilled out over some six or seven kilometers near Route 90 and into the Evrona Nature Reserve near Eilat after the Trans-Israel oil pipeline burst Wednesday night.

The spill had led to 80 people being hospitalized for respiratory issues in the neighboring city of Aqaba in Jordan, according to Israeli media.

The Evrona Nature reserve, which is home to a rare population of doum palm trees, acacia trees, and Dorcas gazelles, was hit hard by the spill and the clean up is presumed to take months.

The Trans-Israel Pipeline Company said they still do not know the reason for the burst, although some media outlets have reported it was due to maintenance work.

At this stage, crews have begun funneling the spilled oil and are expected to finish the preliminary clean-up by the end of the weekend. 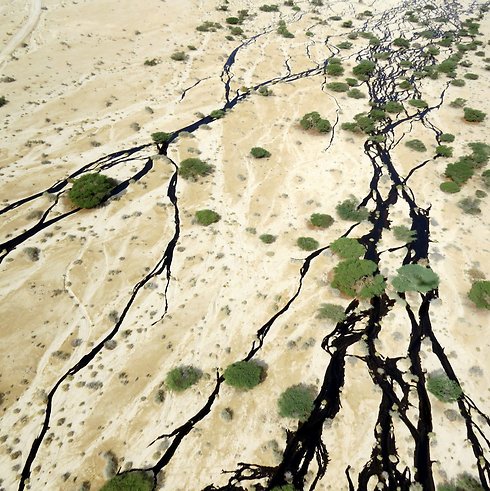 Oil spill in Evrona Nature Reserve. (Photo: Roi Talbi)
However, the Environmental Protection Ministry said the rehabilitation of the nature preserve and surrounding area could take months. "We may have to plough some of the land and the landscape will probably be damaged as several tractors will have to enter a delicate nature preserve," said the Environmental Protection Ministry. The Evrona Nature Preserve includes a large population of rare Middle-Eastern trees, rodents and reptiles, and birds. The chief scientist of the Israel Nature and Parks Authority, Yehoshua Shakedi, predicts that the spill spans 1,000 or more acres in the Evrona Nature Reserve. 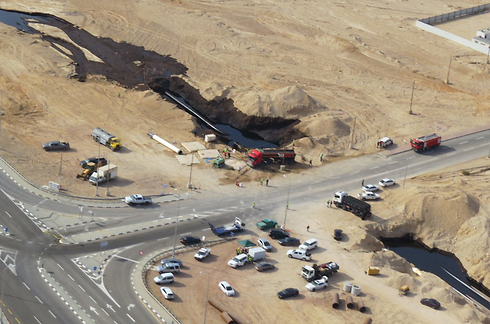 Clean up begins near oil spill. (Photo: Roi Talbi)
"This is a flat area, and so the oil spread out over a large area and in several flowing channels," explained Shakedi. The Environmental Protection Ministry noted that the rare doum palm trees in the reserve were not in danger and that the spill had not reached the border with Jordan, although the preserve still sustained heavy damage. One of the main concerns is that the oil, if not cleaned up swiftly, could spread further out into the preserve.

The Environmental Protection Agency said that the Green Police opened an investigation into the circumstances leading up to the spill and will assess whether the necessary steps were taken and how the various crews functioned as a response. 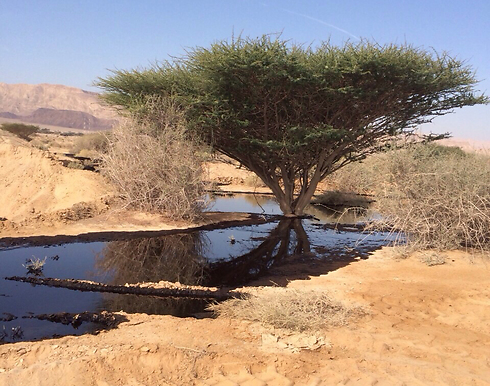 Dr. Gilad Golub, the CEO of the Environmental Services Company, specializes in the treatment of hazardous waste and pointed out that with every passing minute, more and more land is being polluted.

"The oil that was spilled created three sources of pollution: oil that must be pumped, oil polluting the soil that must be burned, and polluted soil that that needs immediate biological treatment," Golub said. "This is a large amount of oil, and therefore the several actions must be taken to reduce the speed of the damage and restore the contaminated land in the near future," Golub said. The Trans-Israel pipeline was built in 1957 to transfer oil from Iran to Europe, but today is used to transfer oil between Ashkelon and Eilat. The Eilat Ashkelon Pipeline Company (EAPC) operates the pipeline as well as several other oil pipelines in Israel.