Palestinians tell ICC they want to join the court

Addressing members of the International Criminal Court for the first time, the Palestinians said Monday they have consensus to join the tribunal in the hopes of seeking justice for Israel's alleged crimes.

"We view the ICC as the international legal and peaceful mechanism to combat impunity and seek accountability and justice," Palestinian UN Ambassador Riyad Mansour said in his speech to the 122 members of the Assembly of States Parties to the Rome Statute, which established the ICC. 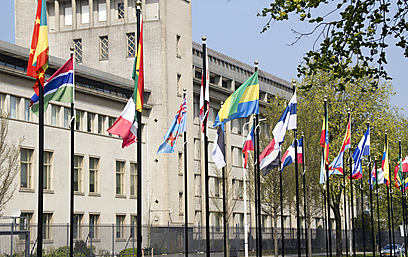 The International Criminal Court in The Hague. (Photo: Shutterstock)

"It is the court where the Palestinian people desire to seek justice for the war crimes and crimes against humanity being perpetrated against them by Israel, the occupying power," Mansour said.

The ambassador added that Palestine "may very well be the 123rd state party," but the timing is up to its leaders.

Mansour said the Palestinians were "profoundly grateful" for the invitation to participate in the assembly's meeting as an observer. That became possible after the UN General Assembly voted overwhelmingly in November 2012 to upgrade the Palestinians' status from a UN observer to a non-voting observer state. Previously, the Palestinians could attend as an "entity."

There were some behind-the-scenes objections last week from several European countries to allowing Mansour to address the assembly, but they were smoothed out.

In his short address, Mansour accused Israel of committing war crimes during the 51-day Gaza war last summer and by building settlements on "occupied Palestinian territory."

Israel has said the military was as careful as possible to avoid civilian casualties during the war. It blames the heavy civilian death toll on Hamas, accusing the Islamic militant group of launching rockets - and drawing retaliation - from school yards, residential areas and mosques.

More than 2,100 Palestinians were killed, mainly civilians, in the fighting, according to UN and Palestinian estimates. Seventy-two people were killed on the Israeli side.

Mansour alluded to the opposition of the US and Israel to Palestinian membership in the court. "Anyone claiming that joining the ICC is a red line that should not be crossed is in essence opposing your collective position of what the ICC stands for," he said.