Compromise resolution supports 'in principle recognition of Palestinian statehood' but as part of two-state solution with Israel.

STRASBOURG - The European Parliament has stopped short of pushing for outright recognition of a Palestinian state on Wednesdat, urging renewed peace talks instead.

Legislators voted 498-88 in favor of a compromise resolution supporting "in principle recognition of Palestinian statehood" - but as part of a two-state solution with Israel. The resolution supports two states on the basis of 1967 borders, with Jerusalem as the capital of both states. 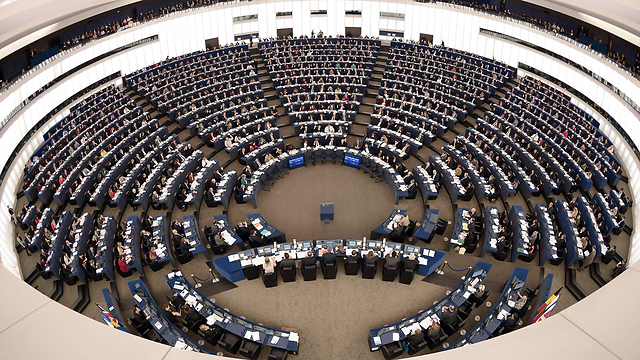 European Parliament (Photo: AFP)
After years of deadlock in Mideast peace efforts, a growing number of European leaders and lawmakers want to unilaterally recognize a Palestinian state. Supporters hope that would force negotiations to resume. Israel's government argues recognition would discourage the Palestinians from negotiations and make peace harder to achieve.

The issue is divisive and prompted shouting and emotional arguing in Wednesday's debate in the European Parliament.

The vote, that was scheduled for last month, was postponed over disagreement on the wording of the notion.

Left-wing parties who proposed the motion - the European United Left/Nordic Green Left (GUE) and the Progressive Alliance of Socialists and Democrats - want to recognize Palestine now, and believe such recognition could help lead to a peace accord with Israel.

"The right-wing parties, who represent a majority in the European parliament, wanted a wording similar to the Spanish decision, which reads that recognition will be declared after Palestinians and Israelis reach a peace agreement," PA official Nabil Shaath told Palestinian news agency Ma'an.

The move comes on the heels of Sweden and Ireland's decision to recognize Palestine and symbolic votes on the topic in Spain, Britain, Ireland and France. It reflect mounting frustration in the EU at Israel's expanding settlement program on land the Palestinians want for a state following the collapse of US-sponsored peace talks.

Reports received by the Israeli Foreign Minister indicate similar votes on recognition of a Palestinian state are expected in other European parliaments in coming weeks, among them Portugal, Italy and Slovenia.

A senior Foreign Ministry official said that "this is an avalanche" and that Israel does not have a lot of tools to deal with such a wave because of the freeze in diplomatic talks.

Israel has been working to foil the decision, with officials warning that if the motion passes, the country will view Europe’s decision as anti-Israeli. Israel's ambassador to the European Union David Walzer and members of his delegation held urgent meetings recently with the parties' political advisers. The ambassador also held an urgent briefing meeting with dozens of members of the European Parliament.

After Sweden officially recognized the state of Palestine in October, the Social Democrats announced its widespread support of the move, and the president of the center-left party stated that such a decision would be the only solution to end the Israeli-Palestinian conflict, and that it would benefit both parties.

He claimed that the EU should be more involved in the peace process and recognize Israel and Palestine as two nation states living side-by-side. He also said that the French faction in the European Parliament would push for recognition of a Palestinian state, as well as some other left-wing factions.

Ambassador Walzer, however, stressed that a unilateral recognition of a Palestinian state will not help in bringing Prime Minister Benjamin Netanyahu and Palestinian President Mahmoud Abbas to the negotiation table but will only push the two sides further away.

The GUE group's draft text “urges all EU member states … to recognize the state of Palestine on the basis of the 1967 borders with Jerusalem as the capital”.

Itamar Eichner and Ynetnews contributed to this report.