Rabbi Manis Freidman. 'If the birds figured it out, you can figure it out'
Photo: @CineAttico

The Zohar's secrets of sexuality

'The Lost Key,' a revolutionary documentary film which has been endorsed by rabbis, seeks to 'bring sex back into the spiritual experience in which two become one,' producer says.

When his marriage fell apart, Ricardo (Ezra) Adler, a secular Jew from Venezuela, suffered a serious crisis that led him on a journey.

He sought out many religions and sects in his quest to discover the secret of a stable relationship, but it led nowhere. Some friends who saw how distressed he was dragged him to an Orthodox rabbi, where he was first exposed to what he calls "the secret of Jewish sexuality."

The journey eventually turned into a bold and intriguing documentary film, "The Lost Key," which describes the process many couples experience on the way to "ideal sexuality," according to the Kabbalah.

This revolutionary film which openly discusses sex was examined and endorsed by rabbis, including Chief Sephardic Rabbi Yitzhak Yosef, who gave it the "hechsher" (rabbinical product certification).

"Do you think a rabbi can teach you anything about sex?" Adler asks his interviewees in a series of street polls conducted in the United States. They all reply with an emphatic "no," until Rabbi Friedman steps into the frame.

"With sex you don’t need any advice," he says. "The birds figured it out, you can figure it out. But if you want to achieve intimacy, now that's a really ambitious plan."

"One of the most significant reasons people choose to divorce is problems in the bedroom and lack of intimacy," says Adler. "There was a moment when I said to myself that I should make a film in order to share this hidden knowledge with the rest of the world."

A film with a kosher certification

The diverse spectrum of couples who appear in the film is surprising: Religious, secular and ultra-Orthodox. Director Ricardo Adler inserted himself among the interviewees.

"It took me seven years to make this documentary," he says. "In addition to Rabbi Manis Freidman who appears in the film, the process was escorted by two other rabbis, a Sephardic one and an Ashkenazi one.

"I wanted to make a film about sex that would be totally kosher. The permits I received do not apply to haredim who do not watch women at all or yeshiva students. But there were certainly Orthodox rabbis who watched the film and enjoyed it very much. And yes, the Chief Sephardic Rabbi gave his approval." 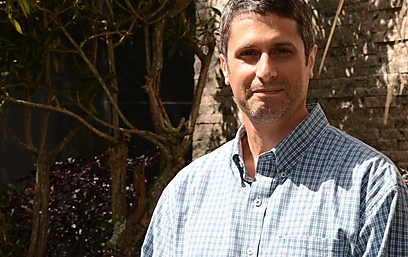 Ricardo Adler. 'Union' is the point in sex in which souls transcend the natural boundaries of their bodies and unite as one creation of body and soul' (Photo: @CineAttico)

The kosher certificate does not reduce the direct and candid conversations about sex that appear throughout the documentary.

"We had to delete things that were 'too much' here and there, but it did not diminish the intensity of the exposure. At the end of the day, this is a film about intimacy and its significance in Judaism, but it is crafted in an elegant way."

Weren't you worried about such an intimate exposure?

"My character is not the only one exposed in its most private moments. Most of the participants took this daunting step, but we felt that this was a mission.

"There are a lot of couples who are suffering in the world because their relationship has become unstable, and we have something to give them. Secular couples who stayed secular reconstructed the sexual aspect of their lives around these principles.

"Three out of four couples we turned to refused to participate in the film. Those who did are the heroes, my heroes or heroes in their own eyes."

'Hollywood has turned sex into a bestial act'

Adler, a graduate of Stanford, was born in England to a secular family. He grew up in Venezuela, studied in the US and did not take any real interest in his Jewish-ethnic roots.

"The meeting with the rabbi, which I was literally dragged to by a couple who were friends of mine, was an amazing experience," he recalls. "I was hypnotized. I started to study more about the roots of Judaism, and in the end I also became religious. But I felt that regarding sexuality, something was lacking. This surprised me, because it is one of the most fundamental things, and in this case I needed to dig deeper, which I did."

"Through the exposure of deeply concealed sources about Jewish sexuality, I understood that the whole way we perceived our relationships is fundamentally wrong.

"Sex in the Western society has become something physical and technical. Hollywood has turned sex into a bestial act, something that is only there for sexual satisfaction. The purpose of this documentary is to reinstate sex as an act of intimacy, sex as a spiritual experience of union of two that become one."

Adler was surprised to discover that religious Jews are not necessarily familiar with the ideas that the film presents.

"I have a lot of religious friends who live according to the halachic laws, but they didn’t understand at all what they were doing, or what the result was supposed to be. If you do things in a mechanical way you don’t get to see the beauty and the places that this can lead you to.

"There are different levels of sex and intimacy that a person can create, and the film seeks to bring the viewer as close as possible to what the mystics call "the union," that point sex in which souls transcend the natural physical boundaries of the body and unite as one physical and spiritual creation.

"My message to the viewer is that you can dramatically change your marriage. You can be happier in the bedroom after implementing the relationship principles of the Zohar. And the result is that if you are more connected to your spouse, and you can have a long lasting and happy relationship.

"It has already happened to me and my wife, and we want other couples to experience a different level of connection in their relationship.

"The sexual revolution of the 1960s created a world of problems. We are trying to fix that by starting a different sexual-spiritual revolution. If we can create a larger movement of people that understand what living in real intimacy means, everyone will benefit."

How did people react to the movie in other film festivals?

"Absolutely amazing reactions that I did not expect. People are thirsty, they feel that something is missing in their relationship, and in their lives and this film fills in the blanks for them.

"What is interesting is that most people feel the connection to these ideas at one level or another. At the end of one screening one guy came up to me and told me frankly "I don’t believe in God but I got some good ideas from the film."