Lapid: Netanyahu did nothing to lower cost of living

Yesh Atid chairman accuses the prime minister of failing to help Israeli citizens during his 6 years in office; Likud hits back, saying its chairman led many successful economic initiatives.

Yesh Atid launched an attack Sunday evening against Prime Minister Benjamin Netanyahu's morning announcement that he supported an increase in the minimum wage to NIS 5,000 a month.

The decision was already agreed upon a month ago by the chairman of the Histadrut Labor Union Chairman and the head of an umbrella group of industrialist employers. 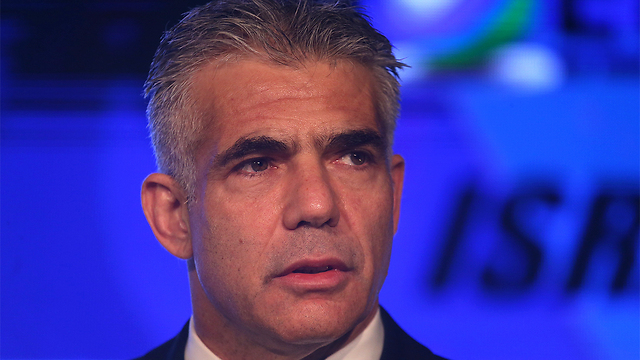 MK Lapid went on the offensive in the scathing statement. (Photo: Motti Kimchi)

"The prime minister is acting like he's living in an episode of 'Polishuk'," read a Yesh Atid statement, referencing am Israeli satirical television show about a bumbling politician.

"The prime minister joyously announced in today's cabinet meeting that he decided to pass the plan to raise the minimum wage, after refusing to get involved and take part in the negotiations that went on under finance minister Lapid with Histadrut and industrialists, which prevented a general strike and led to the wage increase.

"A moment after leading Israel to unnecessary elections, and following an 80 percent rise in the price of housing during his tenure, Netanyahu halted today one of the most important programs in years to increase availability of rental apartments and to lower rents by hundreds of shekels for young couples," the statement continued.

"With a wave of his hand, Netanyahu shamelessly decided to stop the Finance Committee from voting on the program only because it was a program spearheaded by Yesh Atid. The prime minister thus harmed young couples once more."

The former finance minister's party also criticized the government's policy towards settlements. "The prime minister and minister of defense passed the program to divert hundreds of millions of shekels to settlements for the building of roads in Tapuach and Yitzhar, public works in Itamar and isolated settlement, and a visitor center in Samaria.

It was also reported that Lapid requested Sunday morning that the Attorney General look into the legality of funds transferred to settlements during the election season.

Likud hit back with what they said was a partial list of Netanyahu's accomplishments. "Prime Minister Benjamin Netanyahu led the economy and Israeli society to great achievements – until the arrival of the failed finance minister and Housing Cabinet Chairman Lapid," the Likud statement read.

"Free early childhood education, development of roads and trains, the open skies agreement, the new ports in Ashdod in Haifa, cell phone and broadcasting authority reforms, completion of the border fence in the south and ending infiltration, budgeting the Iron Dome, establishing the National Cyber Unit, transferring IDF bases to the Negev, free dental care for children, and more are just a small part of the achievements that preceded the increase of the minimum wage to NIS 5,000.

"Netanyahu was also the one who raised the minimum wage before to NIS 4,300 and who, as prime minister and finance minister, led the market and the economy responsibly and successfully even during the global financial crisis."