Lapid called the proposed funding for the settlements "election bribery," noting that he blocked such a move while serving until recently as finance minister.

The recently-fired minister also slammed Netanyahu for turning a blind eye to poverty for electoral gain, saying "All he had to do was wait one month in order to pass this budget and help those poor people he's now talking about." Lapid claimed the 2015 State Budget which he had helped advance was "the beginning of the solution" with more than "10 billion shekels, all to social issues." 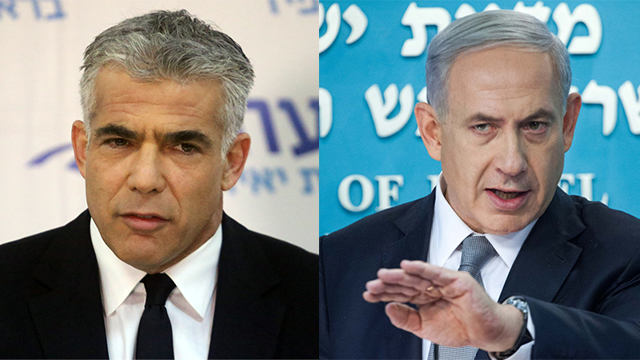 During the heated build-up to the primary season in Israel, ahead of the snap elections on March 17, "Lapid said Mr. Netanyahu is taking credit for something he didn't do, worse than that he's trying to avoid responsibility for something that he did do."

Lapid on Sunday lodged an official complaint with Attorney General Yehuda Weinstein under the heading: "A demand to prevent the theft of public funds – the transfer of monies to settlements during an election period." Lapid says in his complaint that the move "lacks transparency" and is being carried out "without public oversight and after the Knesset has already disbanded" in an effort to appease Likud voters ahead of the party primaries.

"I demanded putting a stop to the transfer of hundreds of millions of shekels to isolated settlements," Lapid commented. "I'm not talking about Jerusalem, Ariel or Gush Etzion. I'm talking about a bypass road to Tapuach, a public building in Yitzhar. These are the same hundreds of millions of shekels I blocked two months ago as finance minister during a stormy meeting with the prime minister.

"This money is election bribery to settlers from isolated settlements who've taken control of the Likud Central Committee and are using the primaries to threaten the senior Likud officials. It must be stopped. It's indecent, and it's illegal. This money is wasted money that is needed in Be'er Sheva, Kiryat Shmona and the Gaza-border communities, and not in places that will not be a part of the State of Israel under any political settlement," the Yesh Atid party leader added.

"The prime minister must refrain from distributing illicit political funds and treating the public coffers like they were his party's private business," wrote attorneys Guy Bousi and Ronen Eviani on behalf of Lapid in the complaint to the attorney general. "The attorney general needs to stand firm and prevent the bleeding of the public coffers right away, before it's too late."

Lapid said Netanyahu was using his dismissal from the Finance Ministry to take liberties with public funds. "My party's forced exit from the government gave the go-ahead for the underhand transfer of funds and established facts on the ground for the next government, in terms of the transfer of monies to isolated settlements," he said.

"The 450,000 Judea and Samaria settlers, who went there with the approval of the governments of Israel, are Israeli citizens for all intents and purposes – and the assault the left makes on any and every legitimate budgetary transfer, as part of the settlers' rights as citizens with equal rights and obligations, is cynical and disregards the hard facts," Knesset Finance Committee chairman MK Nissan Slomiansky (Bayit Yehudi) said in response to Lapid's complaint.

Meanwhile, speaking on Sunday at a conference of the Institute of Certified Public Accountants in Jerusalem, Bank of Israel Governor Karnit Flug said that election campaigns that came around too frequently were bad for the economy.

"The big challenges facing the economy will require reforms and decisions that a stable, long-serving government can promote consistently and with purpose."