Op-ed: Millions of Muslims have nothing to do with terror but hundreds of thousands support jihad, suicide bombings and even the Islamic State. So what can Europe do about it?

"Not all Muslims are terrorists, but almost all terrorists are Muslims," wrote Abdulrahman al-Rashed, the former general manager of the Al-Arabiya television news channel in the important Arabic newspaper Asharq al-Awsat.

This is, in brief, Europe's big dilemma. Millions of Muslims have nothing to do with terror but, according to surveys, hundreds of thousands support jihad, suicide bombings and even the Islamic State. Thousands of them actively join global jihad. And there are few who carry out terror attacks in France. So what can Europe do? How does it cope with this?

The Muslim community in Drancy, a Paris suburb less than a 30-minute drive from the scene of Wednesday's attack, is led by Imam Hassan Chalghoumi, who combats any expression of radicalism.

In the past few years, he has been repeatedly warning against what is happening in mosques in France. The French Muslim Council has ostracized him. All his appeals to the French establishment have been rejected. He has to walk around with bodyguards following a series of attempts to hurt him and his family members. 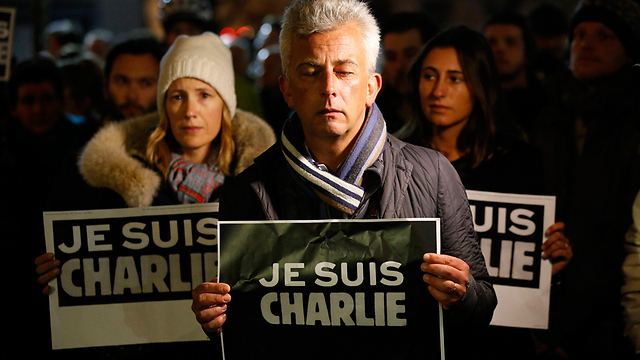 Solidarity rally in London following Wednesday's attack. 'There is no need for Islamophobia, it's time for jihadophobia' (Photo: MCT)

France is helpless. It's hard to monitor a creeping radicalization which is taking place in thousands of mosques, but all the funding sources could have been blocked, especially the capital which arrived from Qatar. Money is not the only problem, but it's definitely a problem.

This terror attack was written on the wall. The jihadists already targeted the Charlie Hebdo satirical newspaper before, and clarified that they would do it again. They said they would and they did.

This is a painful attack, which is connected to the very heart of free France. The targeted magazine is not the most popular or most circulated newspaper in the country – far from that – but it has positioned itself at the front of the battle for freedom of expression and has clarified that it would not give in to threats.

It would be sad to see the far right, which is usually racist and anti-Semitic, gaining political power as a result of this attack. And it would be encouraging if the free world starts taking the Muslims from Chalghoumi's school more seriously and showing them more sympathy.

There is no need for Islamophobia, it's time for jihadophobia.