Hamas has condemned the attack led by two French jihadists against the satirical magazine Charlie Hebdo, which killed 12 people in Paris, the group said in statement published in French, but fell short of condemning the deadly attack on a Jewish supermarket that left four dead.

Hamas "condemns the attacks against the Charlie Hebdo magazine and insists that the difference of opinions and thoughts cannot justify murder," the statement said. 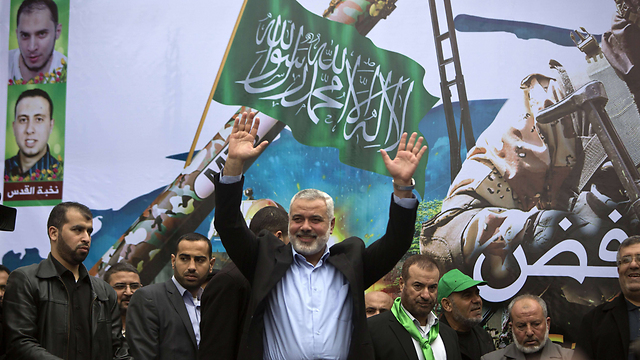 The terror group also responds to accusations by Prime Minister Benjamin Netanyahu, who recently said that France, Israel and the "civilized countries" all faced the same threat.  "These terrorists that killed journalists in Paris, they (...) launch rockets at civilians from Gaza," Netanyahu said, drawing a link between ISIS and Hamas.

In response, the Gaza terror group said that "Hamas condemns the desperate attempts of Prime Minister Netanyahu to link our movement on the one side, and terrorism throughout the world on the other side (...) These miserable attempts are doomed to fail, " the statement said.

The group however failed to condemn the murder of a French police officer or the the killing of four hostages at a kosher supermarket in Paris, which French President Francois Hollande on denounced Friday  as "an appalling anti-Semitic act."

At the deadly Friday incident Hollande warned that the danger to France - home to the European Union's biggest communities of both Muslims and Jews - was not over yet.

"These madmen, fanatics, have nothing to do with the Muslim religion," Hollande said in a televised address. "France has not seen the end of the threats it faces."

Even Iranian President Hassan Rouhani denounced the "terrorism" and violence committed in the name of Islam after the deadly attack on French satirical magazine Charlie Hebdo in Paris. Rouhani said "violence and terrorism is reprehensible whether in this region, in Europe or in the United States."

"Those who kill and carry out violent and extremist acts unjustly in the name of jihad, religion or Islam provoke Islamophobia whether they wish it or not," said Rouhani.

Hundreds in southern Afghanistan rallied to praise the killing of 12 people at the French newspaper Charlie Hebdo, calling the two gunmen "heroes" who meted out punishment for cartoons disrespectful to Islam's prophet, officials said Saturday.

The demonstrators also protested President Ashraf Ghani's swift condemnation of the bloody attack on the satirical newspaper, according to the officials in Uruzgan province.

"The protesters were calling the attackers heroes and were shouting that those who had mocked the Prophet Mohammad were punished," Qawi said.

Provincial police chief Matiullah Khan said that police had been informed in advance of the demonstration, which was allowed under the Afghan constitution's free-speech provisions.

"They provided good security and it was peaceful," he said.