Many French Jews are going through an acceleration Israelization process
Photo: AFP

The dilemma of France's liberal Jews

Analysis: Paris terror attacks worsen the situation of secular French Jews, many of whom still believe in the Republic's universal values and feel that France, rather than Israel, is their national home.

A large part of the French Jewry has been going through accelerated "Israelization" processes for years: In its language, in its culture and religiousness, at home and in the communities.

They visit Israel on a regular basis, are involved in Israeli politics, enjoy Israeli music and films and even read Israeli literature, which has become a big hit among French publishers. The Israelization is particularly evident in the synagogues.

This process increased the pool of potential immigrants, mainly of traditional Jews, mostly of Moroccan descent. The soaring anti-Semitism among Arabs and the left, and of course the Islamic terror, accelerated these processes.

About 7,000 Jews immigrated this year, three times more than in 2012. The massacre at the kosher supermarket in Paris will likely bring thousands more, and tens of thousands will continue to nurture a "Boeing aliyah" lifestyle – with one foot in Paris or Marseilles and the other in Ashdod, Netanya or Jerusalem.

The French-Republican dream faded away for many Jews not just because of the growing Arab-Islamic presence accompanied by violent anti-Semitism, but also because Israel has turned into a source of attraction and influence for the Jewish world.

Israel is today the center of Jewish existence in Paris and in the entire world. Its big shadow attracts Jews to immigrate, and even its critics among the Jews, like Prof. Dominique Moïsi, need Israel as a source of their identity and tribal belonging. 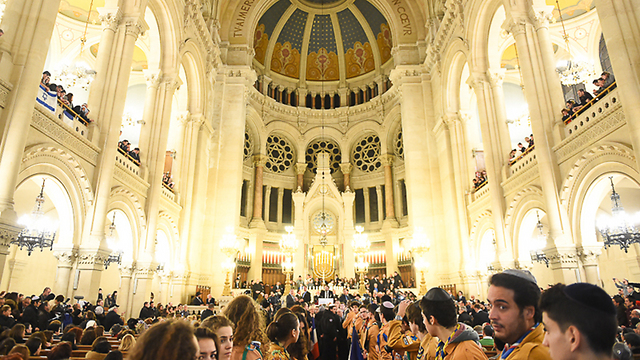 Paris synagogue. 'Some liberal Jews will become more Zionist, while others will drift away or look for immigration options in North America and Australia' (Photo: Israel Bardugo)

The more secular French Jews are caught in a big trap. Many of them still believe in the Republic's universal values, including the secularism doctrine. They feel that France, rather than Israel, is their national home.

They include members of "progressive Judaism" communities like the Reforms and Conservatives in the United States. For example, the 15th arrondissement community led by young female Rabbi Dolphin Horvilleur.

Horvilleur studied medicine at the Hebrew University in Jerusalem and was ordained as a rabbi in the US. She speaks fluent Hebrew and is trying to advance the French multiculturalism vision with a focus on interfaith dialogue. The guest of honor at Horvilleur's synagogue last Yom Kippur was Imam Hassen Chalghoumi, who is attacked by radical Islamists.

The recent terror attacks worsen the situation of liberal Jews like Horvilleur. Some of them will become more Zionist, perhaps beyond their original plan, while others will drift away or look for immigration options in North America and Australia.

Meetings with liberal Jews in France are always accompanied by a sense of embarrassment over the Republic's future. The older people yearn for the golden era in the France-Israel relations in the 1960s, while the young people stress the economic possibilities created by globalization and a transnational Europe.

"There is no longer a Jewish issue in France," says Dominique Schnapper. "There is only a French issue."

Schnapper, a devout Republican, served until recently as a member of the Constitutional Council of France. She is also known as the daughter of famous Jewish intellectual Raymond Aron.

Schnapper is the chairman of the board of the French museum of Jewish art and history, but does not see herself as part of the Jewish community. Some of her grandchildren are Catholic.

But Schnapper belongs to a generation which is becoming extinct. When she talks about the "French issue," she is referring to the growing gap between France's official commitment to a universal citizenship and secular culture, and a tough reality of growing Middle Eastern ethnicity and burdensome Muslim religiousness.

Schnapper is against the strengthening Israelization among France's Jews, stressing that the "new anti-Semitism" only comes "from the bottom," while official France works tirelessly to protect the Jews and even encourages cultural Jewish prosperity.

The French prime minister's statement that "if the Jews leave, France will lose its identity" is definitely authentic. But even the liberal Jews admit that the fear of sending their children to governmental schools is taking over their lives. It's possible that the liberal French Jewry has reached the twilight stage.