For Palestinian cartoonists, religion is off limits

While eulogizing staff of Charlie Hebdo killed by Islamic extremists, Palestinian illustrators generally agree that mocking Islam, or any religion, is overstepping the mark.

In the spirit of Charlie Hebdo, Palestinian cartoonist Ramzy Taweel is making his feelings about the French satirical weekly crystal clear – his latest illustration equates the publication to toilet paper.

Palestinian political cartoonists, including Taweel, rushed to eulogise the staff of Charlie Hebdo killed by Islamic extremists in an attack on their offices in Paris last week, publishing images defending free speech, condemning violence and expressing solidarity with France.

But as the magazine bounced back and sold out in record time with a fresh cartoon of the Prophet Mohammed, the Palestinian illustrators generally agreed that mocking Islam, or any religion, is overstepping the mark. 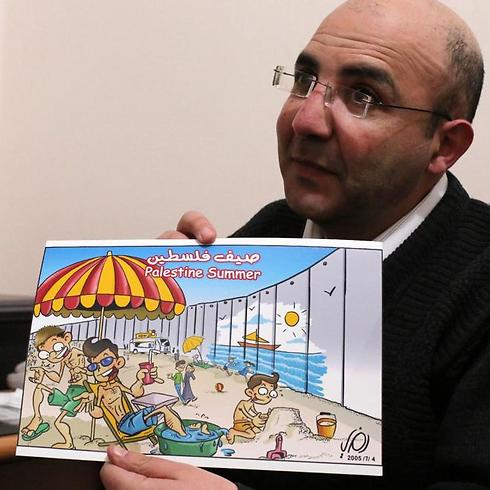 Ramzy Taweel shows one of his drawing in the West Bank city of Ramallah (Photo: AFP)
"My heart is with the families, and what happened was terrible, for France, for its people, and for cartoonists," 36-year-old Taweel said, hunched at his home in Ramallah over an electronic sketch pad. "It's forbidden to kill anybody for his thoughts. I can give you many quotes from the Koran forbidding you to so much as talk to someone who insults you.

"But does that mean that I accept what they draw? No."

Taweel's latest drawing, which he worked on as Charlie Hebdo's latest edition was about to hit the shelves, features a man sitting on a lavatory, reading a copy of the French magazine and exclaiming in English: "Toilet paper industry is flourishing!"

"Is it really freedom to insult one billion Christians or Muslims?" asked Taweel, who draws on a freelance basis for cartoon websites.

Fellow Palestinian illustrator Mohammad Sabaaneh, who works for newspaper Al-Hayat al-Jadida, agrees that insulting religion is tasteless, but has chosen not to criticise Charlie Hebdo.

"What happened in Paris, especially in a country where there is genuine freedom, was a shock, and struck us particularly as cartoonists," he told AFP sitting in his uncluttered office in Ramallah. 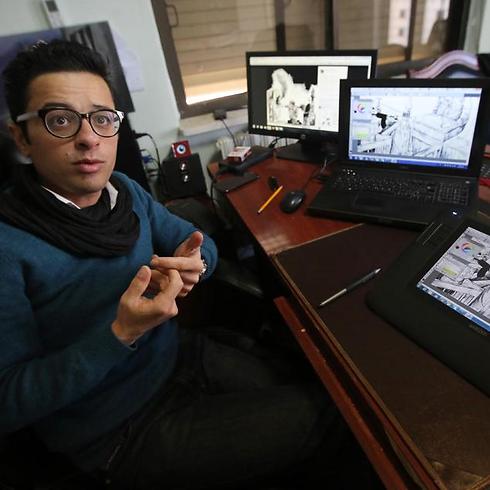 Mohammad Sabaaneh, who works for newspaper al-Hayat al-Jadida, speaks at his office in Ramallah (Photo: AFP)

"Palestinian cartoonist Naji al-Ali was killed because of his drawings," he said, looking solemnly at a large portrait of the late, celebrated illustrator who was gunned down in London in 1987 in a case never solved.

Ali created the ubiquitous Handala, an eternally wandering Palestinian refugee child who watches injustices unfold before him, and still features in street art throughout the West Bank.

The political cartoons made him many enemies throughout the Middle East, but Palestinians and other Arabs allege he was assassinated by Israel's Mossad intelligence service.

'The pen and the smile'

For 36-year-old Sabaaneh, who sports round glasses and a scarf and scribbles furiously on a sketchpad, the attacks on Charlie Hebdo's office were despicable and damaging to Islam.

His cartoon from just after the attacks shows a militant firing a rocket into the offices of Charlie Hebdo, while the blowback from the rocket launcher blackens and damages a mosque just behind the attacker.

Still, Sabaaneh says poking fun at religion – a staple of the French weekly's content – is a luxury for countries that don't suffer the same political upheaval as the Arab world.

"In Palestine we're asking for political freedom, to improve the situation of Palestinian citizens" under Israel's occupation, he said. "We have more pressing problems to talk about than religion.

"Faith is a very sensitive topic and I try to keep away from it. In any case, there's a difference between constructive criticism and criticism for the sake of it – swearing or insult," he said.

"Personally, as a cartoonist and a Muslim, I reject the cartoons that insult the Prophet. But you have to react in kind, combating idea with idea, cartoons with cartoons – not through murder." 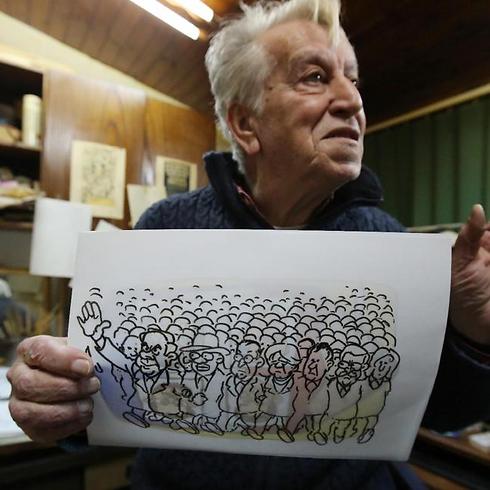 Baha al-Boukhari, who draws for daily al-Ayyam newspaper, shows one of his drawings in Ramallah (Photo: AFP)

But he and other mainstream Muslim leaders slammed the use of violence in reaction to depictions of the Prophet, which are considered forbidden in Islam.

Veteran Palestinian cartoonist Baha al-Boukhari, who draws for daily Al-Ayyam, said the reaction should be to simply shrug off the offence.

"From an artistic point of view, I don't find those images funny – I sort of think, it's an insulting image, so what?" the 70-year-old said.

"Our weapon is the pen and the smile," he said.