Some 300 survivors are joined by leaders from Poland, Germany, France and Ukraine and other dignitaries at death camp for ceremony marking International Holocaust Remembrance Day.

Around 300 survivors of the Auschwitz death camp were gathering on Tuesday to mark 70 years since its liberation by Soviet troops, joined by world leaders for a commemoration held in the shadow of war in Ukraine and a rise in anti-Semitism in Europe.

Tuesday's gathering in southern Poland marks perhaps the last major anniversary that survivors of the Nazi German camp will be able to attend in numbers, given the youngest are now in their 70s. Some 1,500 attended the 60th anniversary.

Around 1.5 million people, mainly European Jews, were gassed, shot, hanged and burned at the camp in southern Poland during World War Two, before the Red Army entered its gates in winter 1945. It has become probably the most poignant symbol of a Holocaust that claimed six million Jewish lives across Europe.

The presidents of Poland, Germany, France were among hundreds attending the commemoration in a giant tent erected over the brickwork entrance to the Auschwitz II-Birkenau camp, part of the complex that is now a museum. The US sent a delegation led by Secretary of the Teasury Jack Lew, while Israel will be represented by Minister Silvan Shalom.

Minister Shalom said the recent attacks against Jews were "proof that anti-Semitism is once again rearing its head, and the fact that world leaders are here is proof that the world will not stand silent. I am here today to tell the whole world with pride – am Yisrael chai!"

France's Francois Hollande made the trip less than three weeks after Islamist gunmen killed 17 people in Paris in attacks on the Charlie Hebdo satirical weekly newspaper and a kosher supermarket. Four French Jews were among the dead, the latest victims of a recent spate of armed attacks on Jews in Europe.

Speaking earlier in the day at the Paris Shoah memorial to French Jews who died at Auschwitz and elsewhere during World War Two, Hollande addressed France's 550,000-strong Jewish community. "You, French people of the Jewish faith, your place is here, in your home. France is your country," he said.

World Jewish Congress President Ron Lauder will say in his speech at the ceremony that the recent attacks in Paris against Jews and satirical cartoonists were evidence of the increasing hatred and extremism in Europe.

Notable for his absence will be Vladimir Putin, whose military intervention in Ukraine has helped drive West-Russia relations to their lowest ebb since the Cold War. 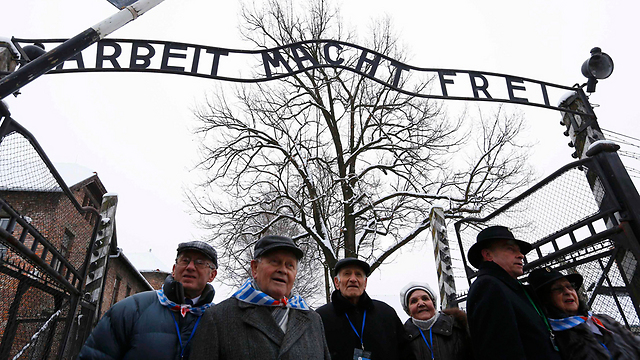 Survivors at Auschwitz (Photo: Reuters)
Poland has been one of the most vociferous critics of Russia's March annexation of Ukraine's Crimean peninsula and its support for pro-Russian separatists in eastern Ukraine. Wary of the domestic political consequences, Poland did not send a full diplomatic invitation to Putin, sources have told Reuters. "There is a war going on in east Ukraine," Polish Justice Minister Cezary Grabarcyk told Polish ZET radio. "It would be hard to imagine, in this situation, hosting Russia's president. Albeit informally, Russia is taking part in this conflict." 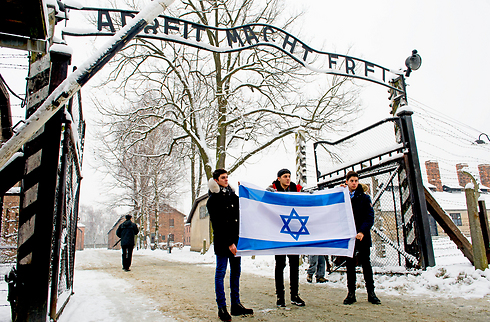 Teens holding the Israeli flag at the entrance to Auschwitz (Photo: MCT)

The UN General Assembly will also host a ceremony to commemorate the International Holocaust Remembrance Day. The event, which was scheduled for Tuesday, has been postponed to Wednesday due to the blizzard that covered New York City in deep snow. President Reuven Rivlin and Yad VaShem chairman Avner Shalev will be in attendance.

Other official ceremonies will be held in Prague and in Theresienstadt. Knesset Speaker Yuli Edelstein will represent Israel in these ceremonies.

Merkel: Must be on guard

Russia will be represented at the commemoration by Putin's chief of staff, Sergei Ivanov. Putin sent a message extolling the role of the Red Army in ending the Holocaust, saying it had "saved not just the Jewish people but also other peoples of Europe and the world." France's Francois Hollande makes the trip less than three weeks after Islamist gunmen killed 17 people in Paris in attacks on the Charlie Hebdo satirical weekly newspaper and a kosher supermarket. Four French Jews were among the dead, the latest victims of a recent spate of armed attacks on Jews in Europe.

European Jews warn of a growing under-current of anti-Semitism, fuelled by anger at Israeli policy in the Middle East and social tensions over issues of immigration, inequality and economic hardship that have contributed to a rise of far-right political movements, notably the grass-roots PEGIDA movement in Germany. 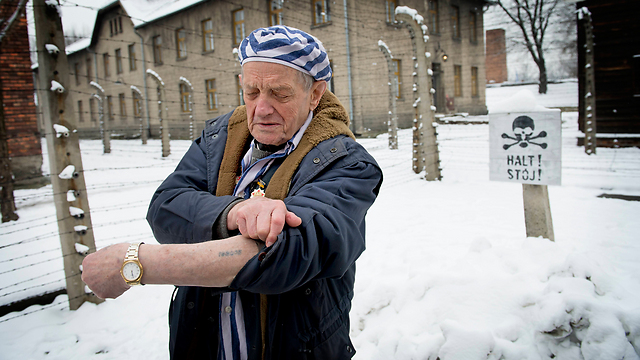 A Holocaust survivor showing his number tattoo (Photo: MCT)
On the eve of the anniversary, Chancellor Angela Merkel said Germans had an everlasting responsibility to fight all forms of anti-Semitism and racism. "We've got to constantly be on guard to protect our freedom, democracy and the rule of law," Merkel said. "We've got to expose those who promote prejudices and conjure up bogeymen, the old ones as well as the new." The camp's victims also included, among others, Roma, homosexuals and political opponents of the Nazis. David Wisnia, an 88-year-old survivor of Auschwitz, said on Monday the Holocaust was "almost impossible for a human mind to comprehend." A choir boy as a child at Warsaw's Great Synagogue, which was blown up by Nazi forces in 1943, Wisnia will sing a memorial prayer in Hebrew on Tuesday.

"I pray to God that we as human beings are able to learn something from it," he said.

Ahiya Raved, Reuters, and the Associated Press contributed to this report.