Israel must think hard about its response to latest Hezbollah attack

Analysis: The Israeli defense establishment must decide whether to let Hezbollah feel it has now settled scores and restore calm, or to respond harshly and possily prevent further similar attacks in the future.

Hezbollah's attack on an IDF vehicle on the northern border Wednesday morning is a clear escalation, and one that requires careful consideration.

Does Israel now enter into a broader conflict with Hezbollah or should it let it go on the grounds that this is Hezbollah settling their account with us? It's cruel to say, but this is frequently this way: When they have shed enough Israeli blood, they will have apparently responded sufficiently enough to stop.

On the other hand, Israel must consider the fact that if it does not act now, and harshly, it may well see similar events in the future. At this stage, the IDF top brass, Defense Minister Moshe Ya'alon and Prime Minister Nenjamin Netanyahu are facing a real dilemma.

This latest Hezbollah attack comes in the wake of rocket fire on northern Israel from Syria. A senior military source said that Hezbollah was behind the attack from the Syrian Golan towards Mount Hermon and the area of the Merom Golan community. Hezbollah is responsible, but its people were not necessarily the ones who actually fired.

The rocket fire was likely carried out on behalf of the "axis" (Iran-Syria-Hezbollah) as part of the retaliation for the an strike last Sunday attributed to Israel. The rocket were likely not fired into Israel by Hezbollah men or Syrians, but by their messengers, apparently in order to cover their tracks so that the Israeli response would not be too strong.

In any event, the Israeli response Tuesday was quick to come. The purpose of the IDF's late-night strike was to make it clear once again to Iran, Hezbollah and Syria that Israel will not accept a new front on the Golan. This was made clear by attacks on Syrian army posts (the 90th Brigade) in an enclave they still control in the New Quneitra area and northern Golan Heights.

The strike intended to signal that the Assad regime could lose the only outposts it still controls on the Golan, if Hezbollah continues to launch terror attacks and high-trajectory fire against Israel from that area. The threat is concrete and is aimed at making the Iranians and Syria reconsider their intention to let Hezbollah operate against Israel from Syrian territory.

In simple words, in Tuesday night's strike Israel raised the stakes that Hezbollah and its Iranian patrons are forced to consider if they continue operating from the Golan. The possibility of a deterioration in such a situation is increasing.

And back to Tuesday's rocket fire. In the two previous incidents in which rockets were fired in response to Israel strikes, the Hermon was also attacked with 107-milimitter rockets, which are relatively small and are fired from a small launcher.

Hezbollah, the Iranians and the Syrians are walking on thin ice here. They want to retaliate by causing damage and losses to Israel, but at the same time – and they are saying it out loud – they want to avoid a flare-up which will develop into an all-out war, whether at once or as a result of a deterioration of an act of revenge or an Israeli response and another act of revenge, and so on and so forth.

What happens in our region sometimes, like in Operation Protective Edge and the Second Lebanon War, is that both sides mean one thing but something else happens, something that is almost always far worse and more harmful for both sides than initially estimated. And that usually happens because of a miscalculation.

Tuesday's rocket fire in the Golan, therefore, intentionally targeted open areas. There were only a few hits on the Israeli side, far from any real target. The rockets were fired so that they would be detected by radar, trigger the air raid sirens and create sounds of explosions.

It's reasonable to assume that the rockets or mortar shells were placed by members of a Palestinian or Syrian organization who are cooperation with the Assad regime. That was the case in previous incidents and that was likely the case on Tuesday as well.

Another main purpose of the rocket fire was to show that even if Israel wanted – through its alleged strike early last week – to thwart the establishment of a second front in the Golan, it failed. The rocket fire proves that the front is active, alive and kicking.

So what were the shooters trying to achieve? We must be cautious because it's hard to reach clear conclusion as a result of one incident. But from the nature of the fire and the small number of rockets, we can cautiously estimate that the Hezbollah-Iran-Syrian axis is trying to retaliate by creating constant tension and a permanent state of alert on the Lebanon border and in the Golan Heights. The constant tension and the IDF's heightened state of alert are claiming a heavy economic and moral price, even if there are no casualties. 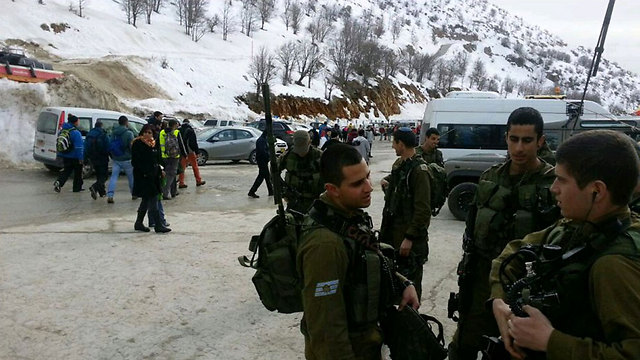 This method of retaliation does have an advantage, however: The IDF will not respond powerfully, but moderately, as long as there are no deaths among IDF soldiers and Israel's citizens.

The heightened state of alert in the north is costing the IDF a lot of money, affecting the training programs and consuming hundreds of flight hours for fighter jets and other aircrafts, which cost hundreds of thousands of dollars a day.

In the civilian area, the tourism to the Hermon ski resort and Golan guesthouses is suffering heavy damage, the residents cannot lead a routine life and their morale is damaged.

This is all achieved by Hezbollah, Syria and Iran very easily: Occasionally, they send five or six gunmen to the border area, on the Lebanese side. These men are detected on the radar screen on the Lebanon border and then disappear. They fire two or three rockets, one to Mount Hermon in order to drive away the skiers, and one to Merom Golan in order to drive away the zimmer guests and wine lovers, and achieve their goal without being punished.

And the proof is that Israel's response to Tuesday's rocket fire was moderate. Twenty artillery shells towards the source of fire hardly cause any damage or losses on the other side. The IDF fired at the sources of fire, the place where the rockets or mortar shells were fired from, but it's quite reasonable to assume that whoever launched the rockets used an electric timer, while the activists themselves escaped to a safe place much earlier.

This type of retaliation, which is mainly aimed at economically wearing out the residents of the Lebanon border area and the Golan and impact on their morale, challenges Israel because it's hard to plan a suitable deterrent response while maintaining "proportionality." The international community will find it difficult to accept an extensive Israeli military blow in response to two rockets that did not cause any casualties.

This restriction stems not only from concerns over the international public opinion, but also because Israel doesn’t want to respond intensely on Syrian territory and get involved in the civil war there. That's exactly what Syrian President Bashar Assad wants, and it would serve his purposes in the Arab world. We should remember one more thing: Tuesday's rocket fire was only the first course, an exhausting but not fatal act of revenge, which the axis can execute in no time and without any problems through its messengers. It's safe to assume that it won't end here and that we will see more serious acts of revenge matching the blow the Iranians and Hezbollah were hit with last Sunday.