Op-ed: Netanyahu-Weinstein relationship points to a double conflict of interests: While attorney general serves both as government's legal advisor and as head of prosecution, prime minister has the power to influence moves related to AG and to his authorities.

We were recently informed of the special caution exercised by the State Prosecutor's Office in the investigation of the "Bibi Tours" affair due to the public implications involved in an investigation against a prime minister. Special caution was likely also exercised in the "bottle affair" at the Prime Minister Benjamin Netanyahu's residence.

I agree with the need to be extra cautious, and I was never keen on the investigations prime ministers in Israel were led into.

As we all know, an election period calls for extra caution too. But this caution seems to fade when it comes to the brother of Kulanu Chairman Moshe Kahlon, who had an old case suddenly pulled out against him, and to the investigation against Knesset Member Faina Kirshenbaum of the Yisrael Beytenu party.

The root of the problem lies in the attorney general paradox. In a state in which "conflict of interests" has become a criminal offense and a sign of corruption, there is an institution which stands above the prosecution and is entirely based on a built-in conflict of interests.

The attorney general has a double role: He serves as an advisor to the government ("advice" which has turned into an order) and he also heads the prosecution. There is a clear conflict of interests between these two positions. 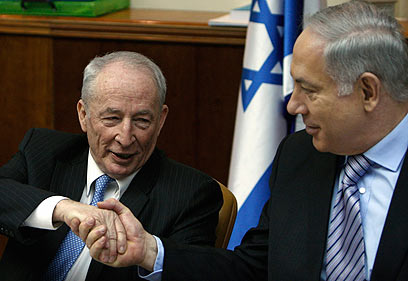 Weinstein and Netanyahu. How will the prime minister decide on a crucial move which the attorney general does not approve of? (Photo: AP)

Attorney General Yehuda Weinstein has disqualified himself from handling the cases of people he provided consultation to in the past as a lawyer. But those exact same considerations apply to public figures, including the prime minister, who consult him – even if it is not about their private matters but about matters related to their public position.

Naturally, the joint work sometimes leads to close relations and sympathy between the attorney general and the government ministers, while in other cases it can create serious differences of opinion. The question is how will the attorney general act when he turns into a prosecutor on the affairs of the prime minister and ministers whom he provides consultation to? Can his decision as a prosecutor be disconnected from his relations with those who are now under his mercy?

And it turns out that Netanyahu's policy is not to make any move which Weinstein doesn’t approve of. That's how it became clear that former Justice Minister Yaakov Neeman's plan, which was raised during my term as justice minister, to split the position of attorney general into head of prosecution and the government's legal advisor – a crucial move which would guarantee the rule of law and governability – cannot be implemented in the Netanyahu government.

The crucial law for the establishment of a system which would control the prosecution could not have been passed either. Eventually, we saw the administrative establishment of a control body which is unauthorized to supervise the attorney general and is in fact subject to him.

This leads to the following question: How will Netanyahu (and every other prime minister) decide on a proposal for a move which is crucial and helpful, but which the attorney general does not approve of? Clearly, the decision is made in a situation of a conflict of interests – the public interest is to support the move, while the prime minister's personal interest is not to anger the person who heads the prosecution.

And so ahead of the elections, Weinstein issued a series of orders directed at the government ministers, as if he were the commander of a group of recruits – an act which humiliates the government and ridicules democracy. We have not heard, however, a single complaint from Netanyahu about this situation.

It's possible, of course, that all the decisions are relevant, and that the special caution exercised in the "Bibi Tours" case has nothing to do with the special caution exercised by the prime minister in regards to the attorney general and his status as the undisputed commander of the government and its ministers. Nonetheless, this double conflict of interests should come to an end.