Sergeant Major Ohad receives citation for mission after entering tunnel to gather information that would allow its destruction and prevent Hamas from infiltrating Israel.

A sergeant major who volunteered to enter a Hamas tunnel alone during Operation Protective Edge, and by doing so provided vital intelligence, will receive a citation on Monday in a special ceremony at the Southern Command at the Palmachim base. "The deputy commander told us that the only way to figure out how to destroy the tunnel would be to send down a soldier alone. I volunteered right away," said Sergeant Major Ohad of Sayeret Yahalom, an IDF special missions engineering unit. 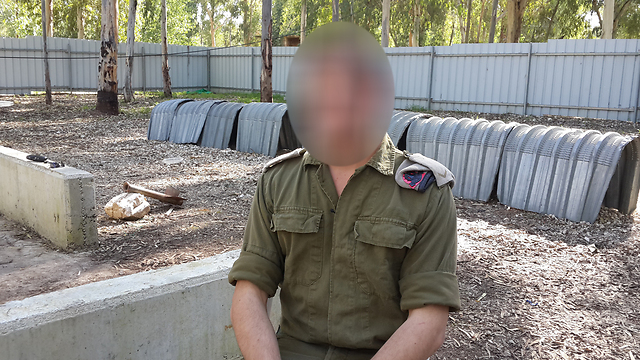 Sergeant Major Ohad. (Photo: Yoav Zitun)
Ohad is one of 53 officers who will receive citations for their work during Operation Protective Edge at the special ceremony at the IDF's Southern Command on Monday. He will receive a medal from the General Officer Commanding (GOC) over the Southern Command for his bravery in entering the Hamas tunnel alone in order to provide information as to how the tunnel could be destroyed. 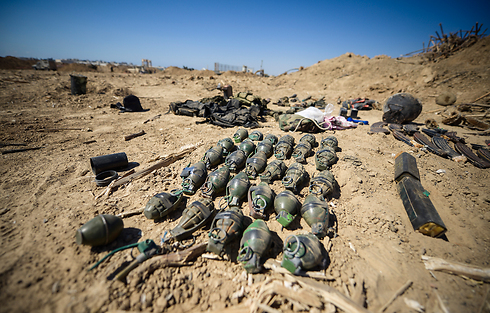 Explosives found in Hamas tunnel in northern Gaza Strip. (Photo: IDF Spokesman's Unit)
During Operation Protective Edge, the IDF's intelligence unit and the Shin Bet had been in a race against time to locate the precise positions of 30 tunnels that reached into Israeli territory. The tunnel to which Ohad and his unit were called to was found in the southern Gaza strip during the night. The fear had been that Hamas was on the brink of sending its secret commando unit, known as the "Nukhba" unit, through the tunnel. The intelligence provided on the tunnel before its destruction was incomplete and both robots and dogs from the IDF canine unit had trouble entering the narrow shaft, making it impossible for the engineering unit to ascertain the depth, length and height of the tunnel and whether there were any weapons or explosive devices inside. 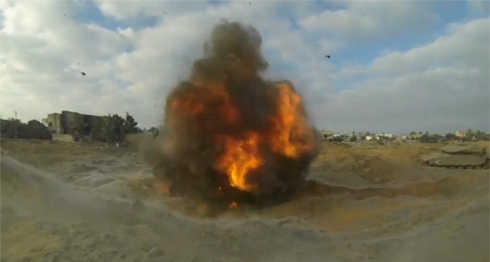 IDF tunnel destroyed by IDF during Operation Protective Edge. (Photo: IDF Spokesman's Unit)
At that point, the unit decided it had to send in a soldier to assess the situation and decide whether the tunnel could be destroyed. Sergeant Major Ohad volunteered immediately. Because of the narrowness of the tunnel, Ohad was unable to enter with his personal weapon or bullet-proof vest. Attached to wires, Ohad entered the tunnel wearing a helmet and carrying flashlight, camera, and gun. 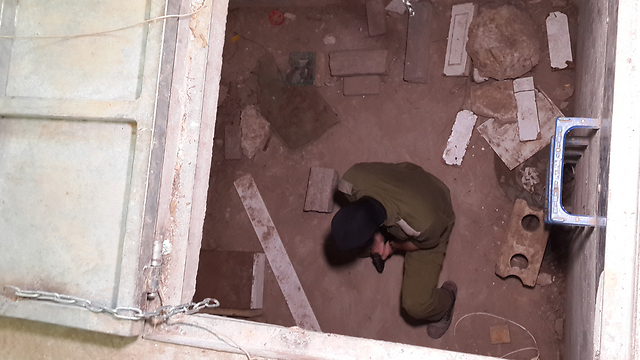 Ohad inside Hamas tunnel. (Photo: Yoav Zitun)
"The circle of light from above began to disappear in the distance and the tunnel was deeper than we anticipated," the sergeant major explained. "Because of the construction of the tunnel, I went down with only my gun drawn, a helmet with a GoPro camera, no vest, and a flashlight that I turned on only when I understood that it was safe," said Ohad.  "The mission was supposed to last 10 minutes and stretched out for an hour because of professional difficulties."
Ohad films terror tunnel with GoPro attached to helmet.    (כתב : יואב זיתון עורך: בן שפייר צלם: ירון שרון)
X

As his friends and fellow soldiers waited for him up above, Ohad assessed the height, width and depth of the tunnel.

"I was focused on the mission, even though the thought that I could be kidnapped crossed my mind. Because of this, I was prepared and ready. I did not look at the time – nobody promised me that the tunnel was clear of terrorists," said Ohad.

Ohad's comrades stayed nearby as he surveyed the tunnel, even as Hamas launched mortar shells in the area. After completing the mission, Ohad was notified a day later that he would have to return to the tunnel to complete an additional intelligence assessment. During his second mission, he was faced with a surprise. "The agreement was that if I saw any sort of change in the tunnel, I would go straight back up. And on the second descent, I immediately saw equipment and weaponry that had been left behind by terrorists who had been in the place in the past 24 hours," said Ohad. Ohad immediately signaled that he was going back up. The mission was accomplished.

"The intelligence I gathered was enough for our unit to blow up the tunnel within hours, instead of days," explained Ohad.