An election of Jewish values

Op-ed: It's been a long time since we had an election campaign as important to Israel's future as we do now. Our vote will not be about a peace agreement, but rather about the values that would lead to it.

We fell asleep at the wheel. If a peace agreement were on the agenda, voting rates would be sky-high, and each person would have an opinion and an intense desire to have his opinion shape our future.

But in the upcoming elections, despite all of the chatter and propaganda, it feels like the current policy will not change, no matter who gets elected. And the common opinion is that no matter who we vote for - the Palestinian side lacks the desire and courage to say yes.

Everyone is talking about economic equality, lowering the housing prices, strengthening the middle class, supporting the lower class. One means it more, the other less, but eventually any coalition will be compiled of a variety of parties that would cover - one way or another - all positions.
The 'Jewish' Vote
The 10 new Knesset seats
Yizhar Hess
Op-ed: There are 600,000 men and women in Israel who are fed up with the status quo regarding religion and state. The slogan 'there is more than one way to be a Jew' will definitely influence how they vote on March 17.
The 10 new Knesset seats
What are these elections about? If it could have kept pride and arrogance just a little restrained, the previous coalition could've survived. After all, the coalition did not collapse over any fundamental issue - neither diplomatic nor economic. It was all personal. So what are these elections about? 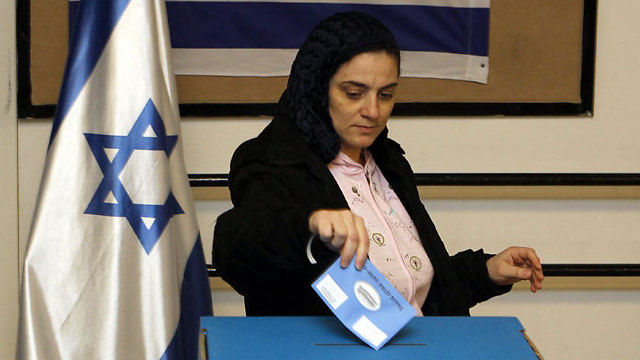 Voting in Jerusalem in the 2013 elections (Photo: AFP)
I can't remember an election campaign more significant to the future of our country. It's true that no crucial diplomatic issue is at stake. What is at stake is our identity as a nation and a state. The army marches on its stomach, but the Jewish people march on their values - we were never the strongest, richest or most numerous, but thanks to our moral and spiritual creations we were not only able to survive, but also shape our own world. We won't be voting on a peace agreement in the upcoming elections, but we will be voting on whether peace among equals is considered a fundamental value in our society. We’ll be voting on whether we believe there's a zero-sum game between democracy and Judaism, or whether we believe a country that is less democratic is also less Jewish. We'll be voting on whether we believe the Jewish identity of the State of Israel will grow stronger when we exclude the value of equality from our Basic Law, or whether we believe quite the opposite - that a country that belongs to all of its people is the highest expression of our Judaism. We'll be voting on whether we want to barricade ourselves against a world that only seeks our destruction - because Esau will forever hate Jacob - or if we want to internalize the concept of Tikkun Olam and be a light unto nations, and with that build new bridges with both old and new friends. We'll be voting on whether we allow xenophobia, fear of strangers and the next terror attack to dictate our agenda, or we want to try to build a society that aspires to social, economic and diplomatic justice in the spirit of "Her ways are ways of pleasantness, and all her paths are peace."

The choice is clear - go out and vote.

Rabbi Dr. Donniel Hartman is the president of the Shalom Hartman Institute, a center of pluralistic Jewish thought and education to scholars, rabbis, educators, and Jewish community leaders in Israel and North America.