Time for a serious election campaign in Israel

Op-ed: There are many reasons to praise Netanyahu, and also many reasons to cricize him - but the bottle-recycling affair is not going to win the center-left any voters.

A few days ago, an important journalist published a draft of a scathing report against the prime minister relating to the so-called Bibi Tours affair. And another journalist, an investigative reporter of some note in his own right, has published material indicating that the draft report is an obsolete one, and that most of the allegations against the prime minister with regard to his overseas trips have been completely refuted.

Is one of them distorting the facts? Did each of them select only the information that best serves specific political objectives?

Forget the answers for now. The final report will come to light one day. What is clear now, however, is the fact that  and it doesn't look like we're going to be able to get out of it. It's bad for all of us. It's bad for the voters. It's bad for Israel. Here and there, we see someone trying to get the debate back onto the right track, to promote a real discussion on social issues, the economy, security, the political situation. It isn't working. The social media networks, insofar as they are a measure of anything, clearly indicate that we are sinking deeper into the bog. 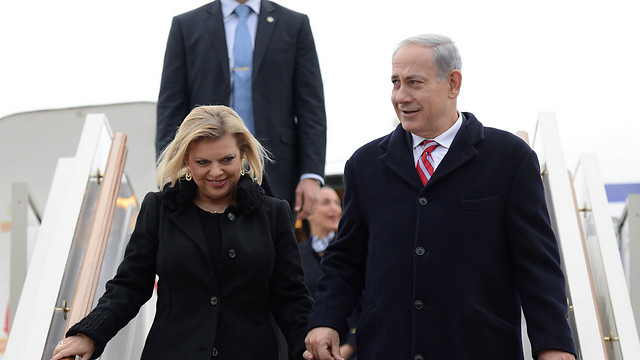 The election campaign in the last two weeks has slipped into a quagmire (Photo: Kobi Gideon/GPO)
,

Israel is up against a geopolitical predicament that no other country in the world is facing. Radical Jihadism, from within and without, is becoming a significant threat. It's already in control of an area larger than the State of Israel, not far from Israel's borders, and its conquest of hearts is even greater than its conquest of territories. Israel is up against hostile world opinion, with the campaign of hatred and incitement being waged by the BDS movement just the tip of the iceberg.

Economic gaps in Israel are the widest among all OECD countries. The country itself is in great shape – a very respectable 19th place on the UN's Human Development Index. But things for its citizens are not good at all, and for the young ones in particular. Housing costs, relative to the average income, and certainly the median, are the highest in the world - 49 months of work in the Netherlands, 66 in the United States and 148 in Israel.

And what are we concerned with? The bottle-recycling affair has been the talk of the town over the last two weeks. Not that it isn't important. Of course it's important. But we appear momentarily to be in need of a draconian rule: No dealing with public corruption in the 60 days before an election. Everything that is said in those 60 days could have been said earlier. More to the point, and on the assumption that whoever is initiating these affairs is seeking to influence the election results – it isn't working. Most of the public isn't buying the goods. The past two weeks show a direct correlation between the publications against Benjamin Netanyahu and the strengthening of the Likud in the polls.

Integrity is an important issue, but by focusing on the issue of integrity under the current circumstances, it becomes just another scrap among the parties for electoral purposes. Bottles? A few perks? So what? A case of blowing things out of proportion or simply election propaganda?

No traditional Likud voter has ever crossed over to the center or the left because of bottles or improper conduct on the part of the prime minister's wife. Not that there isn't a problem. There certainly is one. There certainly appears to be something screwed up in the running of the Prime Minister's Residence. There are concerns that decision-making processes are being influenced by what goes on there in private, and occasionally breaks out. The problem is that it's tantamount to preaching to the converted. And with every additional publication comes the so-called Aryeh Deri Effect: Shas won its highest number of seats, 17, shortly after the widely publicized conviction of its party leader. Now it's the Netanyahu Effect.

Such an effect is not unique to Israel. Support for Bill Clinton remained intact despite the Whitewater and Monica Lewinsky scandals. Jacques Chirac was re-elected despite facing an indictment. Israel is no different. The bottles won't have an impact. Netanyahu has achievements to show too. The Israeli economy is strong, albeit at the expense of the citizens. There are also excellent reasons to oppose Netanyahu. He's responsible for Israel's lowly status around the world. He is incapable of dealing with the geopolitical situation. The Likud and Bayit Yehudi's obsession with the settlement enterprise is distancing Israel's friends, too, and undermining far more important interests. He hasn't been able to come up with a solution to the housing problems.

Those who want to affect a change in government should speak about Netanyahu's failures. Those who want to keep him in power should boast of his achievements. One-third of the Likud voters are more supportive of the positions of the center. These are thinking people. They are willing to listen to serious arguments, from the left or the right. They turn a deaf ear to talk of bottles.

More than a month remains until the election. If the center-left Zionist camp doesn't have a big rabbit in its hat, a real and grave corruption scandal, it would do well to get the debate back onto the right track and focused on the real issues at hand.