British actress plays Maria Altmannm, a jewish woman who battled all the way to the US Supreme Court to get the Austrian gov't to turn over extremely valuable paintings by Gustav Klimt, confiscated when her ancestors fled the Nazis.

BERLIN - Actress Helen Mirren said on Monday her portrayal of a Jewish woman's struggle to get back paintings confiscated when her ancestors fled Austria to escape Nazi rule throws a spotlight on the slow pace of restitution of looted Jewish property.

In "Woman in Gold", being shown at the Berlin International Film Festival, Mirren plays the late Maria Altmann, who battled all the way to the US Supreme Court in her ultimately successful battle to get the Austrian government to turn over extremely valuable paintings by Gustav Klimt.
Art Hunt
Israeli museums check collections for Nazi-looted art
jn1.tv
Agency tasked with tracking down artwork stolen from Jews by Nazis believes hundreds of paintings, sculptures may be on display illegally within galleries in Israel
Israeli museums check collections for Nazi-looted art

Among them was the Klimt 1907 portrait from his "gold period" of Altmann's aunt Adele Bloch-Bauer that gives the film its title. It was reportedly sold in 2006 to cosmetics magnate Ronald S. Lauder for $135 million, at the time the highest price ever paid for a painting.

"So many people from that particular conflict did not receive any justice whatsoever... and so to have one little tiny moment of justice, it is a great thing," Mirren said at a news conference.

She was joined by co-stars including Daniel Bruhl, Max Irons and Ryan Reynolds, who plays Randol Schoenberg, the young lawyer who helped her win her near decade-long case. 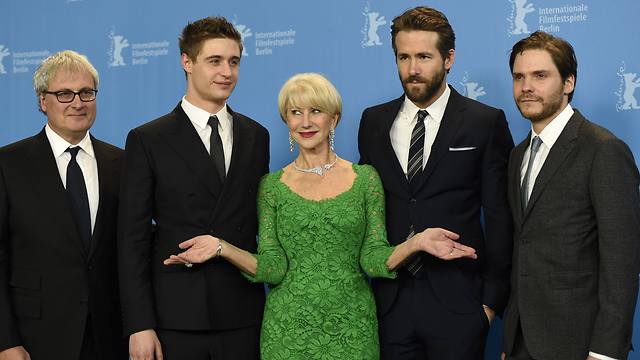 Director Simon Curtis, actors Max Irons, Helen Mirren, Ryan Reynolds and Daniel Bruhl pose during a photocall to promote the movie 'Woman In Gold' at the 65th Berlinale International Film Festival (Photo: AFP)
Anne Webber, co-chair of the Commission for Looted Art in Europe, said there were as many as 100,000 looted art works still unaccounted for, and qualified that as a "vague estimate". "I can tell you that 90 percent of the thousands and thousands of works of art people are searching for still can't be found today. So that gives you an indication of how hard it is to obtain restitution," she said. The film, is being shown in the Berlin Special forum at the festival and will open in the United States and Britain in April.