The Palestinians will open an embassy in Stockholm Tuesday night, cementing closer ties just months after Sweden became the first western European Union country to recognize Palestine as a state.

Visiting Sweden for the first time since recognition in October, Palestinian President Mahmoud Abbas called on other countries to follow Sweden's lead. 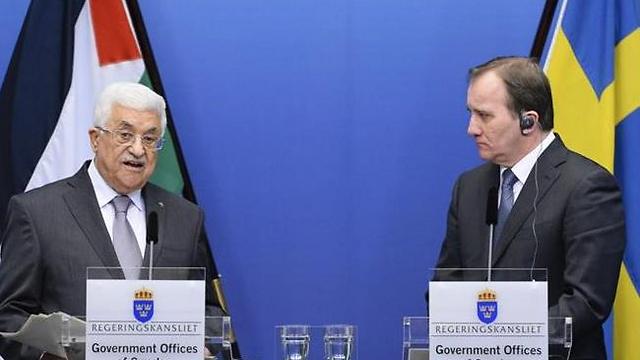 During his visit, Abbas said he will work to revive peace talks with Israel but skirted questions on how to end the conflict or tackle violence by the Islamic militant group Hamas.

Israeli-Palestinian peacemaking has been on hold since the last round of US-brokered talks collapsed a year ago, partly hampered by the gaps between Abbas and Israeli Prime Minister Benjamin Netanyahu.

Palestinian elections are long overdue, strained by the geographic and political split between Abbas and Hamas. In a jab at Hamas, Abbas said Tuesday that Palestinians must be able to decide "who should lead them and if they accept violence or not."

Relations between Sweden and Israel have nose-dived since the initial announcement and Foreign Minister Margot Wallstrom called off a visit to Israel in January. Israel temporarily recalled its ambassador.

Palestinians seek statehood in the Israeli-occupied West Bank and the blockaded Gaza Strip, with east Jerusalem as their capital. Long-running peace talks collapsed nearly a year ago and the Palestinians forged ahead with an alternative strategy to achieve statehood. Most Western European countries have yet to give a Palestinian state official recognition, as has the United States, although the UN General Assembly approved de-facto recognition in 2012. A total of 135 countries recognize Palestine, including several East European nations that did so before they joined the EU. Swedish Prime Minsiter Stefan Lofven said Palestine would open an embassy in Stockholm immediately. In most Western European countries, Palestine has a diplomatic mission, not a full embassy. He promised more aid for Palestine but stressed he wanted progress on reform. "There are challenges: we must help one another to fight corruption, increase gender equality, improve respect for human rights and of course continue the state building process," Lofven said. A deal signed by the two leaders will see Sweden raise aid to Palestine by 1.5 billion crowns ($179.74 million) over the next five years. Lofven used his inaugural address in parliament last year to fulfill a long-standing promise by his Social Democrat party to recognize a Palestinian state. Their resolution in the UN Security Council calling for the establishment of a Palestinian state failed in December but they have also moved to join the International Criminal Court (ICC).