Record-breaking F-16 Falcon to be retired from IDF service

With seven dogfight victories under its wings, Israel Air Force F-16 Fighting Falcon No. 107 is being retired and will go on display at Hatzerim air base in Negev.

With an all-time high of seven dogfight victories under its wings, Israel Air Force F-16 Fighting Falcon No. 107 is being retired and will go on display in the IAF Museum at the Hatzerim air base in the Negev.

The fighter plane's story began in the late 1970s, when Iran, then an ally of the United States, placed an order for several dozen of the first F-16s manufactured by General Dynamics (now Lockheed Martin). Following the ayatollah's rise to power in Iran, however, the deal was scrapped, and Israel jumped at the opportunity and acquired a 75-strong fleet of the fighter aircraft at a bargain price. 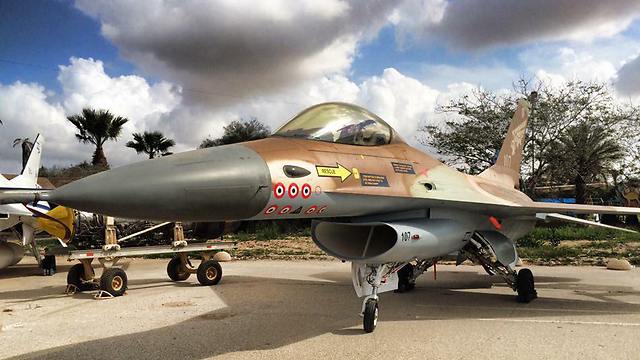 On June 18 1980, the F-16s landed at Israel's Ramat David Air Base, southeast of Haifa in northern Israel. The model was given the name "Falcon1980" and each fighter jet was allocated its own number.

Over the years since, Fighting Falcon No. 107 became the F-16's all-time dogfight champion (worldwide), having downed seven enemy aircraft - a record unmatched even by the most advanced F-16 models in use today.

The Fighting Falcon No. 107 F-16 jet began its history of successful missions on April 21, 1982 when it over threw a Syrian MiG-23 jet with a rocket fired by Colonel in reserves Zeev Raz, who led the bombing of the Iraqi reactor a year before.

On June 9, 1982, during the First Lebanon War, the famed F-16 shot down two Syrian MiG-23 planes. One of the two rockets that led to the Syrian planes' demise was launched by former Israel Air Force commander in reserves Eliezer Shakedi and the other rocket was fired by Colonel Eitan Sativa.

a Soveit made Sukhoi Su-17, and an Aérospatiale Gazelle helicopter all in one blow by Colonel Eitan Sativa.

And that's not all: On June 7, 1981, Fighting Falcon No. 107 participated in the IAF's strike on the Iraqi nuclear reactor, with former Military Intelligence chief Major General (ret.) Amos Yadlin at the controls.

"I was No. 2 in the formation and I released my bombs after Ze'ev Raz (who led the strike on the Iraqi reactor)," Yadlin recalls. "In a three-and-a-half-hour sortie, this plane carried out a tactical mission that had historical implications for the Middle East. Its retirement now is definitely a pang, the closing of a chapter."

Fighting Falcon No. 107 was finally retired from operational duty at the end of 2014, after serving since 1995 as a training aircraft for flight cadets; and in light of its impressive achievements, the aircraft underwent a facelift and now stands proud at the IAF Museum in Hatzerim.