'There has never been so much police on the street, all heavily armed, and despite this a man shoots at a synagogue. It's tragic,' says leader of Jewish community.

The Jewish community in Denmark was shocked on Sunday morning to learn it has lost one of its members in an attack on a synagogue in Copenhagen. "We are of course in shock, one of our young members died last night," Dan Rosenberg Asmussen, a spokesman for the local Jewish community, told Ynet on Sunday morning. "I'm shocked. There has never been so much police on the street, all heavily armed, near the synagogue and despite this a man shoots at a synagogue. It's tragic."

"I met him many times, everyone knows him," Asmussen said of Dan Uzan, the Jewish security guard who was killed in the attack. "Everyone knew him. He has been working at access control in synagogues and other Jewish institutes across the city for 20 years, so he's very known among the Jewish community."

There are some 7,000 Jews in Denmark, some 5,000 of whom live in Copenhagen. And while Danish Jews have experienced anti-Semitism - particularly in the wake of Operation Protective Edge in Gaza last summer - Asmussen explained that anti-Semitism in Denmark is not the traditional kind and noted that the worsening anti-Semitism is similar to the situation in other European countries. 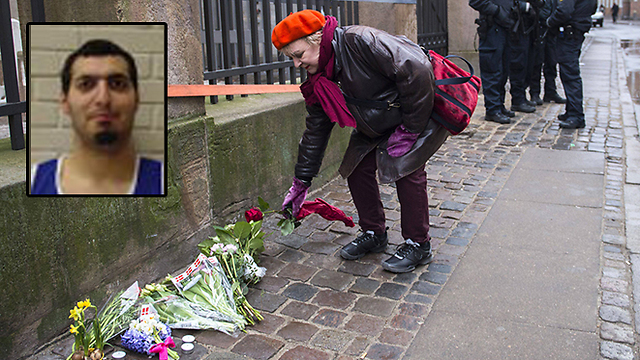 He drew a comparison between the attacks in the Danish capital to the attacks last month in the French capital. "We feel what happened here last night is very similar to what happened in Paris three weeks ago. My best guess is it's politically motivated. Here as well, several hours before the shooting at the synagogue, there was a shooting at a meeting about the freedom of speech conducted by cartoonists. Following that event security has been increased around the synagogue and Jewish institutes."

Asmussen said the Jewish community has warned local authorities about the possibility of attacks similar to the ones in Paris, Toulouse and Brussels occurring in Denmark as well.

"There's a big number of jihadists in Denmark, and that of course scares us because it seems like (they have) some kind of connection to weapons training and (are) capable of doing such attacks. We've been talking to the local police about this serious threat for quite a while," Asmussen added.

The head of the Chabad branch in Denmark, Rabbi Yitzchok Loewenthal, who attended the Bat Mitzvah at the synagogue and left half an hour before the shooting, said that while there were no alerts on a specific threat, security has been increased following the Paris shootings. But this, he said, was not enough. "We demanded police to put officers (outside Jewish community sites) but they didn't do that." However, after the attack at the cafe, "they did put someone near synagogues."