Scuba divers come across 'almost 2,000 gold coins in different denominations' on seabed in ancient harbor in Caesarea; experts say find was 'so valuable that its priceless.'

Scuba divers have discovered the largest trove of gold coins ever found off Israel’s Mediterranean coast — about 2,000 pieces dating back more than 1,000 years, the country’s antiquities authority said Tuesday.

"The largest treasure of gold coins discovered in Israel was found in recent weeks on the seabed in the ancient harbor in Caesarea," the authority said in a statement.

It was by pure chance that members of a diving club in the Roman-era port had come across the coins, which the authority said weighed nine kg but described as "priceless."

"At first they thought they had spotted a toy coin from a game and it was only after they understood the coin was the real thing that they collected several coins and quickly returned to the shore in order to inform the director of the dive club about their find," it said. 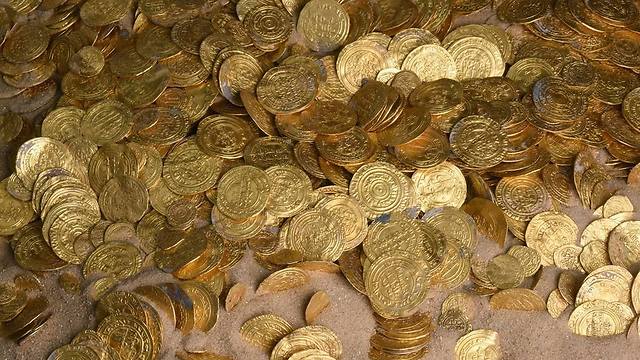 Experts from the authority called to the site uncovered "almost 2,000 gold coins in different denominations" circulated by the Fatimid Caliphate, which ruled much of the Middle East and North Africa from 909 to 1171.

Kobi Sharvit, director of the marine archaeology unit at the Israel Antiquities Authority, said excavations would be carried out in the hope of shedding more light on the origin of the treasure. 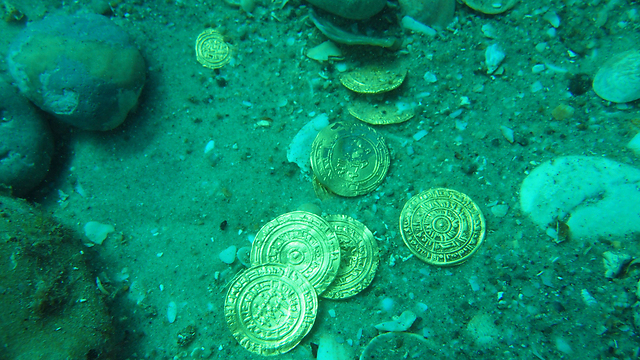 The divers 'at first they thought they had spotted a toy coin from a game' (Photo: AFP/Israel Antiquities Authority)

"There is probably a shipwreck there of an official treasury boat which was on its way to the central government in Egypt with taxes that had been collected," said Sharvit.

"Perhaps the treasure of coins was meant to pay the salaries of the Fatimid military garrison which was stationed in Caesarea and protected the city. 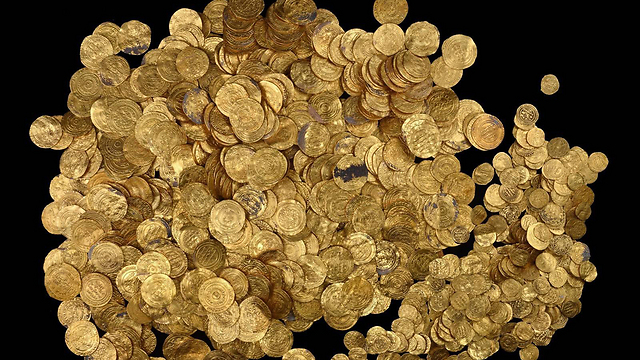 Excavations will be carried out in hope of shedding light on origin of treasure (Photo: AFP/Israel Antiquities Authority)

"Another theory is that the treasure was money belonging to a large merchant ship that traded with the coastal cities and the port on the Mediterranean Sea and sank there," he said.

The Israeli Antiquities Authority declined to put a cash value on the coins, which it said had been exposed as a result of winter storms.

The find was "so valuable that its priceless," spokeswoman Yoli Schwartz told AFP, adding the haul was now the property of the state, and that there was no finder’s fee.