The intellectual terrorism of Roger Waters and BDS

Op-ed: If people like the anti-Israel musician and the boycott supporters had their way, Jews would once again be targeted, and left without shelter.

Never has the divide between anti-Zionism and anti-Semitism been so slender. Two more attacks, in Copenhagen and then London, have eradicated what was left of the distance between these two racist phenomena.

On the one hand,  there was another inciteful attack from the BDS (boycott, divestment and sanctions) brigade, led by Roger Waters, who managed to sign up hundreds of artists in the UK to a boycott of Israel. And on the other hand,  there was another double attack by anti-Western and anti-Semitic terrorism, executed by Omar Abdel-Hamid el-Hussein in Denmark.

BDS is about the silencing of Israelis through boycott. El-Hussein targeted a conference on freedom of speech to silence people through gunfire.

The BDS movement, of which Waters has become one of the world's leading spokesmen, is not seeking a fair settlement of a two-state solution; it is not seeking peace, nor does it seek to end the occupation. It seeks the destruction of Israel, its elimination. Just like that.

The two leaders of the movement, Omar Barghouti and Ali Abunimah, clarify this in the clearest and most vocal way possible. Waters himself, one should note, goes a step further. He is not only anti-Israel, he also spouts anti-Semitic propaganda. In summer 2014, for example, he talked about a Jewish control of Hollywood, which he said was managing to keep people too frightened to join the BDS movement. 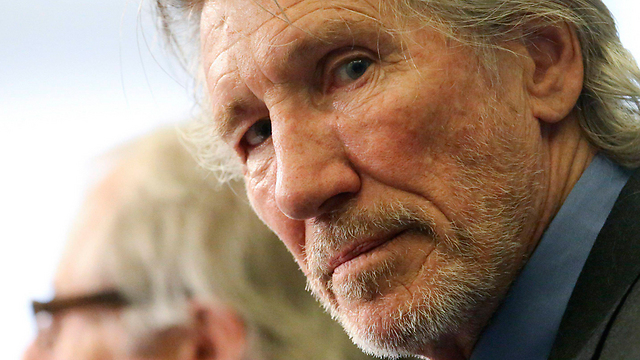 To complete the picture, Waters also equates what the Nazis did to the Jews with what Israel is doing to the Palestinians. If the BDS claims are correct, if Israel really has committed the unique historical crime of ethnic cleansing, if Israel is indeed committing genocide, if Israel is based on systematic apartheid, if Israel is indeed a Nazi state, and if the Jews really do control the world, one can understand and even justify terrorism against Israel and the Jews.

The thing is that el-Hussein and the supporters of BDS are products of the same inciteful propaganda and lies. It did not start this week. One inciteful propagandist, Ran HaCohen, described Israel as a state that fulfilled Hitler's vision. Another propagandist, Yitzhak Laor, claimed in a prestigious British journal that Israel does not need gas chambers because it destroys the Palestinians by increasing infant mortality. These are not criticisms, they are blood libels. This is the way of the BDS movement, spreading lies incessantly, from expressions of horror over what happened in 1948 to what is happening these days in Israel.

For the benefit of those who do not know the truth, here are the facts: In 1948, it was the Arabs who declared a war of extermination against the Jews. It was the Jews in Arab countries who suffered from pogroms. It was these Jews who were dispossessed of their property, who were expelled and became refugees. It was the Europeans in those years, with Churchill at their head, who declared repeatedly that the way to resolve conflicts was through the expulsion of populations to create nation-states. The nation state of the Jewish people also arose because the international community had adopted the principle of self-determination. The Arab world persisted in its refusal to recognize Israel. In the 1960s, the rhetoric of all the leaders of the Arab world was stepped up into the near annihilation of Israel.

Israel did not want to occupy. It had to defend herself, once again, from the threat of annihilation. The Palestinians under Israeli rule - including those in Judea and Samaria, and previously Gaza, and those who are Israeli citizens - enjoy stability and many more rights than in any other country in the Middle East. Their life expectancy has risen to an amazing level, and is now the highest in the Arab world. Infant mortality among the population fell, and is now the lowest in the Arab world. From precisely zero universities in 1967, the Palestinians are now in first place for higher education in the Arab world.

Yes, they have a right to a state alongside Israel and not in place of Israel. But it was the Palestinians who over the last decades rejected again and again any proposal that would lead to this state. They insisted on the "right of return", which appears as one of the three central requirements of the BDS movement.

It's interesting that more than 52 million people became refugees, including more than 20 million in Europe, in these same post-WWII years. Not one of them was granted the "right of return" - the European Court of Human Rights rejected the very idea. But the BDS and its key spokesman Waters continue to make every effort to prevent any chance of peace, and to immortalize Palestinian rejectionism.

I could go on. There are more lies all the time, such as the new fairytale propaganda video from BDS, which aims to prove claims of apartheid by stating that Israeli Jewish students receive an annual budget of $ 1,110, compared to just $ 191 for non-Jewish students. Where the hell did they get this lie? If this is true, Mr. Waters, I hereby agree to join the boycott against Israel. But this is yet another lie, just like all your propaganda is based on lies and more lies. Once these were lies against Jews. With you, Mr. Waters, these lies are against Jews and against Israel.

If Israel and the Jews are so evil, if they are a Nazi monster - as the BDS movement, Roger Waters and Hamas say over and over and over again - then he was definitely justified in taking action, not only against Jews, but against infidels in West everywhere.

It's not just the BDS and it's not just Roger Waters. There are too many media outlets and intellectuals in the West who revisit the lies again and again. This is not criticism, this is incitement. This is intellectual terrorism.

Of course one can criticize Israel. In Israel itself, there is a lively debate. Most Israelis support painful compromise, and oppose the continuation of the settlement enterprise. In Israel itself, anti-Israel and anti-Zionist ideas are expressed - because Israel is a democracy.

Israel is far from perfect. There are also exceptions. Wars also harm innocent people, which is always very unfortunate. One must add at this point, that according to a study by the American Public Health Association (APHA), 85-90% of victims of conflict since World War II have been civilians. This also applies to conflicts of recent decades involving NATO armies, the US and Britain. Even if the findings of the APHA are exaggerated, and even if all the allegations against Israel are right - and they are not right - the IDF causes far less harm than any other army in the world.

These are the facts. But Roger Waters, Omar Abdel-Hamid el-Hussein, the BDS movement and Hamas nurture the idea that Israel and/or the Jews are monsters that stalk the earth. The brainwashing was a success. Hundreds of artists in the UK this week joined calls for a boycott of Israel. It's not just that the lies won, but the purpose of the BDS movement is also to silence anyone who wants to refute those lies. This means, for example, a boycott of Israeli academics.

This is the meaning of the attacks against the Charlie Hebdo magazine in Paris and against the freedom of expression conference in Copenhagen. Intellectual terrorism and murderous terrorism have a shared goal. Both el-Hussein, BDS and Waters are a real threat to freedom of thought and the free world. They cultivate hatred; they cultivate silencing people; they give legitimacy to violence.

Brainwashing, lies and incitement against Jews have already won once. In the world of Waters, BDS, Hamas and el-Hussein, it could happen again.