Oskar Schindler Street in Be'er Sheva, where house prices have risen by up to 62%
Photo: Google Street View

From Tel Aviv apartments that doubled in price in five years to Haifa homes that cost 70-80% more, Israelis are finding it harder and harder to own a home, no matter where they live.

Housing prices in Israel have soared drastically in recent years, but the gravity of the problem across the entire country is not always evident. In anticipation of the State Comptroller's report on the government's failures to tackle the issue, we examined just how great the leap in prices has been over the past few years, with the help of real estate website Madlan.

We compared the cost of apartments in the same or adjacent buildings over time, looking only at homes with similar or identical features. The comparison was based on the price per square meter.

According to government estimates, house prices have only increased by 5 percent in the last year, after they shot up by more than 50% since 2008. Economists warn that this phenomenon could even be exacerbated following the decision by Bank of Israel Governor Karnit Flug to reduce interest rates to an historic low of 0.1%. 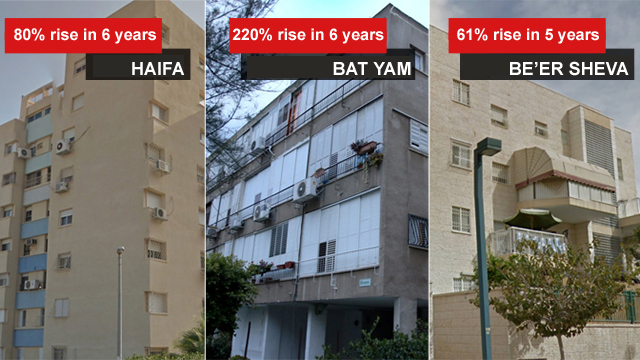 In Tel Aviv we looked at three buildings in three areas, Neve Barbur in the south, Arlozorov Street in the center and Seminar Hakibbutzim in the north. In each place, there was a massive increase in prices over recent years, with the highest being Arlozorov Street, where the cost of an apartment had risen by 106%. In September 2007, the a third floor apartment in the building went for NIS 956,058, and five years later an apartment on the same floor was sold for NIS 1.97 million – more than double. It is unclear whether the apartments had been renovated in the interim, which can affect prices, albeit not at such a high rate.

The Neve Gan neighborhood of Petah Tikva has experienced a building boom in recent years, and the prices in older buildings in the area have risen sharply over the last five years. Four-room apartments in a block built over a decade ago have sold recently for 28 percent more than they did in 2009. The data also showed that a new four-room apartment in the neighborhood would set buyers back by about NIS 1.7 million. The price for a similar apartment in 2008 was between NIS 1 million and NIS 1.1 million.

Even in Tel Aviv satellite town of Holon, we found a building in which prices have more than doubled in recent years. In January 2008, a four-room apartment in the city went for NIS 731, 000, but seven years later, the price for a similar apartment on a lower floor had jumped to NIS 1.47 million. Nonetheless, a three-room apartment elsewhere in the town had also seen its value climb, but while the cost rose at a higher rate than inflation, it only jumped by 33%.

In Bat Yam, next to Holon, we found a building where prices had soared by a staggering 222%. A two-room apartment in the building went in January 2008 for NIS 382,000. A little more than six years later, and a similar home in the same building costs NIS 1.055 million. Given that the apartment sold last year was 13 square meters bigger than the apartment sold in 2008, the weighted price increase can be put at 115%.

In nearby Rishon Lezion, we saw that the price of a five-room apartment had risen by more than 50%. A little further south in Ashdod, the prices in the building we examined had shot up by almost 65% in six years. In our southernmost visit, to Be'er Sheva, we found that apartments on the central Oskar Schindler Street have jumped by about 62% in the same period, according to data from Madlan. 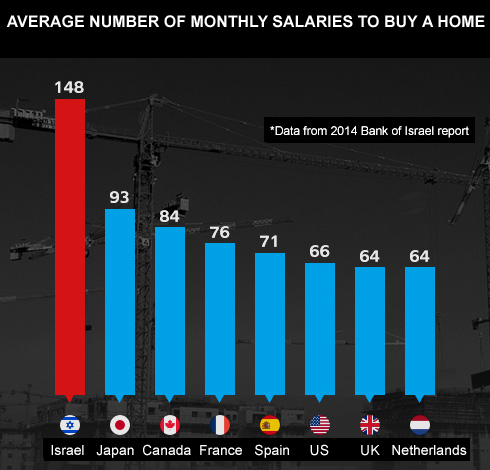 House prices have risen in the Sharon region in recent years too, albeit somewhat less dramatically. The price of a five-room apartment in the Ramat Poleg neighborhood of Netanya rose by more than 50% in two years, according to the data gathered in conjunction with Madlan. Further east, in Kiryat Hasharon, prices for four-room apartments have risen by 27% in five years.

The situation seems equally grave in northern Israel. In Haifa, we examined two apartments, whose prices have increased by almost 70% in a little over five years. In the old Nesher neighborhood, housing prices have risen by almost 80%. But it was the only place in which a 4.5-room apartment cost less than a million shekels. In the high-rise apartment blocks of Haifa's Kiryat Motzkin neighborhood, we found a price increase of about 54% in five and a half years. Nonetheless, the price of a home sold in December 2014 was the same as the price of a similar home sold two years ago. But data from Madlan and the Tax Authority does not show whether the apartment sold in 2012 is classed as a luxury apartment, which would have inflated its price at the time. Moving back to the center a little, we found an increase in house prices of 34% on one Afula street. In Nahariya, however, there was a massive price increase of more than 86% on one street. Ironically, it was in the capital city that we found a relatively modest increase in both buildings we examined on Ben Zvi Street. In four years, prices in Jerusalem rose by just 12%.