For first time since its establishment, Israel's Chief Rabbinate presents binding procedures for kosher supervisors: Don’t bring your laptop to work, treat your colleagues respectfully and don't use dried figs under any circumstances.

Ninety-four years after its establishment, Israel's Chief Rabbinate has finally issued an official binding document regulating the work of kashrut supervisors, as well as kashrut instructions applying to all restaurants, banquet halls and institutions which have received a kosher certificate from the Rabbinate. The instructions include the use of leaves "without bugs" (including hothouse plants) and a ban on figs for fear of worms.
Cost of Living
Rabbinate to boost kosher milk imports
Kobi Nachshoni
Chief Rabbi David Lau says Israel's religious authority working to recognize foreign kashrut bodies in bid to increase competition and prevent price hikes in dairy products market.
Rabbinate to boost kosher milk imports
The work of kashrut supervisors in Israel has never been regulated, leading to many flaws in their performance. Many of the supervisors have never taken a licensing examination. A new book, "Supervision and Kashrut – the Guide for Kashrut Supervisors," includes 211 pages signed by Chief Rabbis Yitzhak Yosef and David Lau and features a series of kashrut terms and rules. A major part of the book was dedicated to butchers traveling abroad as part of teams which have been strongly criticized in the past for squandering and sending unnecessary workers. According to the new instructions, a team sent to a slaughterhouse outside Israel will include 11 people – two butchers, four inspectors, four supervisors and a team leader who must be a rabbi. 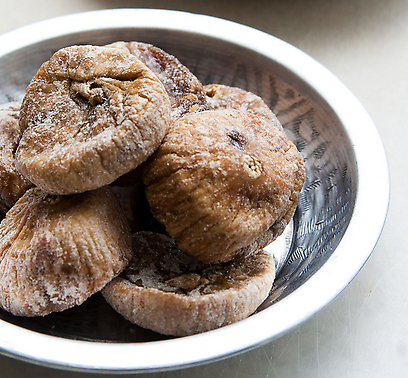 Figs. Not to be found in kosher banquet halls (Photo: Uri Shavit)

According to the new procedure, the rabbi is responsible and is the supreme authority on kashrut issues, and it is his duty to schedule Torah lessons for the team and determine the length of the workers' resting period.

"In order to maintain the alertness and efficiency of the slaughter team members, and particularly the butchers and the inspectors, the slaughterhouse's rabbi must make sure that they do not work more than seven hours, and eight hours at the most."

The binding working rules forbid the supervisors to enter the residential area during their work, excluding dining and prayer times. In addition, the team members "must treat each other respectfully and create a pleasant atmosphere of friendship and cooperation out of modesty."

Following complaints filed with the Rabbinate in the past, the new book includes two unique instructions: "Don't bring laptops to work and only be in touch with the factory's employees on issues related to the job – both during working hours and after work." As for supervisors who wish to combine business with pleasure, the Rabbinate's Kashrut Department rules: "A butcher or supervisor who wants to arrive in Hungary before starting the job, or stay in Hungary after completing the job, must receive approval from Israel's Chief Rabbinate." The kashrut guide includes a specific instruction to use leaf vegetables from plants without insects. All restaurants, banquet halls and factories must only use different kinds of lettuce approved by the Rabbinate "without bugs." From now on, this rule also applies to cauliflower, artichoke, Brussels sprout, asparagus and broccoli, after religious councils in many places in Israel have been lenient in regards to these vegetables. In addition, the chapter dedicated to kashrut supervision in banquet halls, hotels and restaurants includes a sweeping ban on using dried figs for fear of worms.

Spending Shabbat at the hospital

The written procedures also include bad news for kashrut supervisors working in hospitals. According to page 129, "On Shabbat Eve, the supervisor and his family will be given a guestroom until the conclusion of the Sabbath."

In other words, the Chief Rabbinate expects the supervisors to stay in the hospital throughout the day of rest, just like hotels' kashrut supervisors stay in the hotel with their family on Shabbat – the only difference is in the basic conditions between a hotel and a hospital. The book concludes with kashrut removal procedures. Following complaints that rabbis and supervisors would revoke businesses' kashrut certificates without allowing them to prepare and defend themselves, the Rabbinate rules that from now on, the religious council will be forced to send a written notice to the business owner and give him "enough time, but no more than three working days, to details his arguments in writing." In addition, within 24 hours from the arrival of the business' response, the local rabbis must send out a written decision. However, the book states, "in unusual cases in which the local rabbi is clearly aware of a serious kashrut flaw justifying the immediate and urgent removal of the kashrut permit, in order to prevent irreversible damage to the public, the kashrut certificate may be revoked immediately without warning, as long as the business is given the chance to voice its arguments within 24 hours from the certificate's removal."