Challenging journey of integration for Ethiopians in Israel

Although the vast majority of Ethiopian Jews immigrated to Israel during the 1980's and 1990's, economic and social problems related to the hardships of immigration are still evident in their lives today.

Moshe Selomon, a social entrepreneur, spoke to Tazpit News Agency about the actions he thinks should be taken in order to upgrade the social status of the Ethiopian community in Israel. 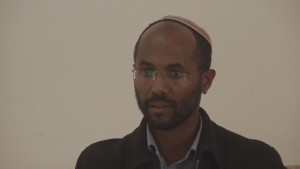 Moshe Selomon (Photo: Natan Epstein, Tazpit News Agency)
"Most Israelis get some kind of financial help from their parents when buying their first home. When my parents bought an apartment I was the one helping them. Not everyone can afford that, so for me it is obvious that there is a need for some sort of affirmative action by the Israeli government," he told Tazpit News Agency. Approximately half of Ethiopian families live under the poverty threshold. In addition, cultural differences, the language barrier, and the relatively older age of some Ethiopians who immigrated to Israel, have created inherent hardships for many members of the 125,500 strong Ethiopian-Jewish community. Integrating into Israeli society was and is still a struggle for many. Aftamo Yosef, a department manager at Israeli NGO Tzeida Laderech, translated as "Provisions for the Road", explains how his organization helps Israelis from all social groups, among them Israelis of Ethiopian origin.

"We mentor young men and women in different stages of their military service. Whether it's calling an officer on behalf of a young soldier, providing moral support, or simply explaining to his parents an army related issue, we give the soldiers and the candidates our full support," he told Tazpit News. 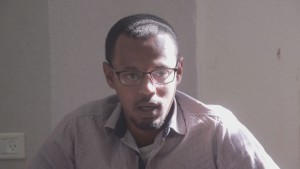 Aftamo Yosef (Photo: Natan Epstein, Tazpit News Agency)
Yosef explains that such support is vital to soldiers and military candidates from the Ethiopian community. Due to the fact that a lot of Ethiopian immigrants arrived to Israel at a relatively senior age, they were not eligible for military service. As a result, some parents from Ethiopian origin do not understand some of the hardships and dilemmas their children endure while serving or preparing for service in the IDF. "IDF service will be absent as a topic of discourse within those families," Yosef told Tazpit. These inherent circumstances make Tzeida Laderech's support of Ethiopian soldiers very important.

Both Selomon and Yosef believe Israel's integration policy could be better. Selomon explains, "The authorities tried to integrate us by erasing our special characteristics and heritage. It's a common problem with every wave of immigration that arrives to Israel," Selomon told Tazpit. Indeed, there is a certain expectation in Israel, that immigrants will become Israelis very quickly. Such an expectation can be unrealistic and painful to immigrants, as they are expected to forfeit old cultural characteristics. "I strongly believe each group in the Israeli society brings its own flavor. Therefore, Israeli society should embrace diversity, in order to create a better more inclusive atmosphere, where there is a place for all the groups that compose the Israeli society," Selomon told Tazpit News. Yosef points out to a different problem, he explains that because the high ratio of Ethiopian soldiers gone AWOL, the IDF decided to better integrate soldiers of Ethiopian heritage by enrolling them to a special course they take in the first four months of their service. Although the special course can be beneficial to some soldiers, Yosef sees the course as creating separation instead of integration. Yosef elaborates, "The majority of soldiers in this course are of Ethiopian origin, that way there's no integration. The army sought out better integration and created nothing but separation. Furthermore, if a certain IDF rookie needs that course, that’s an individual need." According to Yosef "there are many IDF rookies of Ethiopian origin that are straight A students with no criminal record whatsoever. Enrolling them to such a course will be a waste of time and can only damage their motivation," Yosef told Tazpit News. Yosef claims better integration will be achieved only when the Jewish Ethiopian identity is empowered. In addition, Israelis should have better knowledge of the Ethiopian Jewish culture, and "myths and barriers need to be broken," Yosef concluded. Selomon thinks there's an important role for successful Israelis of Ethiopian origin to play in the battle for better integration. "I am actively bringing back successful Israelis of Ethiopian origin to their old neighborhoods, so they can act as role models and empower the communities they grow up in," he told Tazpit News.

"In addition to governmental aid, I believe the community needs to find its inner strength in order to fully integrate into Israeli society," said Selomon.