One of the censored ads
Photo: Studio Bernstein, from the Israeli Medical Association campaign

Campaign focusing on collapsing health system banned by billboard company due to pictures of elderly woman and female doctor. 'Erasing female patients won't change the fact that women must be taken care of too,' says IMA chairman.

Is there anything immodest about a picture of an elderly woman waiting for medical care? An Israeli Medical Association (IMA) campaign near the government precinct in Jerusalem has been censored due to the inclusion of pictures of women.

The Deal Tov billboard company refused to publish the women's photos, telling the IMA that the Jerusalem Municipality bans the publication of women's pictures in "an ultra-Orthodox area." Municipality officials claim, however, that there is no such ban.

In any event, the original campaign was disqualified and the ads were published in Jerusalem with pictures of men only.

The campaign was launched by the IMA about a week ago in a bid to put the issue of the collapsing health system at the center of the election campaign. The IMA campaign featured the picture of an elderly woman with the caption, "Why do I have to wait a year for surgery?" and a picture of a woman doctor asking, "Why is there such a big doctor shortage?" 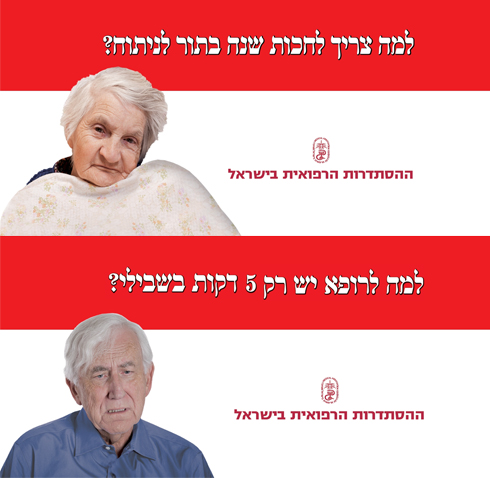 The ads were displayed on billboard across the country last week. The IMA planned to publish the campaign in a central location in Jerusalem: On the corner of Herzl and Rabin Boulevards, near the government precinct.

In light of the billboard company's refusal, the IMA was forced to display the campaign in Jerusalem with the men's pictures only. Earlier, the company explained to the IMA that due to past experience, it had decided not to submit a request to the Jerusalem Municipality to approve the specific ads.

IMA Chairman Dr. Leonid Eidelman noted that all of Israel's residents, including women, suffer when they have to wait in crowded emergency rooms.

"Erasing the pictures of female patients from the Jerusalem billboards does not change the fact that women must be taken care of too," he said. 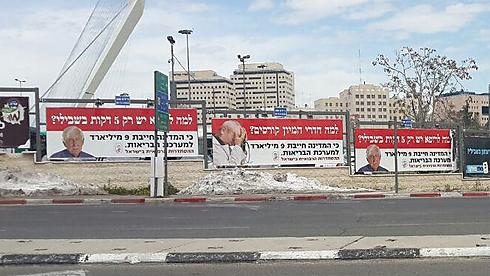 According to Dr. Eidelman, "The attempt to save money on health at the patients' expense, which has characterized all governments in the past 20 years, must stop. The list of priorities must be changed. If increased investment in health is not included in the coalition agreements, patients will suffer even more in the crowded ERs, in the beds in the corridors, in the long wait for surgery and in looking for medications which are not included in the health basket."

The Jerusalem Municipality offered the following response: "The municipality's business signposts department and the billboard advertising department received no request and issued no instruction on the matter.

"The Jerusalem Municipality led by Mayor Nir Barkat permits the inclusion of women's pictures on billboards, has not disqualified any campaign featuring women and has included women in its official advertisements on billboards throughout the term."