Protests in Dimona against mass dismissals. There are real social problems in Israel
Photo: Roi Idan

Israel must lay its ethnic demons to rest

Op-ed: Propping up the ethnic demon are vested interests that cover up the fact that Israel has real problems among its disadvantaged populations – Ethiopians, Russian immigrants and those dispatched to the periphery, not to mention poor Mizrahim and Ashkenazim.

Once every few months, I find myself staring at the television screen and trying to find the right words to exorcise the ethnic demon. I'm sick and tired of it, despite being of Ashkenazi descent. I'm sick and tired of the constant reminders that the nation is divided into Mizrahim and Ashkenazim, even if they are already third or fourth-generation Israelis.

Once every few months, I find myself apologizing, defending myself and squirming in an effort to explain that my social circle is free of any ethnic divisions; saying again that my friends from the army came from all ethnic groups, that my last count showed that hardly any of my closest friends are Ashkenazim; writing again about my neighbors from all sides, about family ties, about my world in which ethnic origin means nothing to anyone, a modern world in which there are no ethnic groups.

After all, who's going to believe me when in the Israel of 2015, the ethnic demon is the most popular story; a demon that sparks interest, movies and opinion polls for election campaigns; a demon that has pundits, fans and expert hunters; a demon that already has a career – or, in other words, a worthy bloodline. 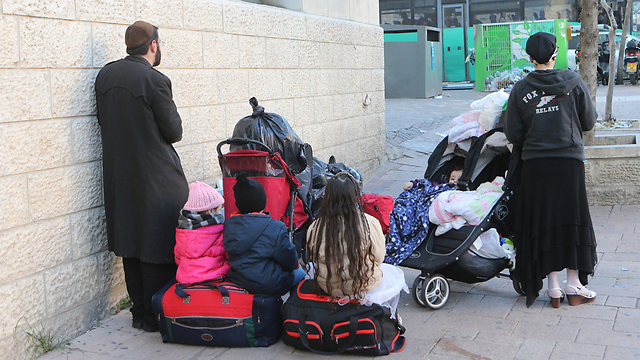 Poverty in Jerusalem. Israel must deal with its real issues (Photo: Alex Kolomoisky)

And I am the only one who has an interest in seeing the demon disappear – because in my Israel, we've already overcome it.

So since I'm a descendant of the wrong ethnic group and don't have the right to exorcise the demon just like that, let's begin with suggestions for a solution, any idea that would put an end to the ethnic discourse so many years after the immigration from Morocco and Iraq.

I'm willing to add Makhlouf to my name if it would help, willing to change the composition of the Israel Prize committee so that it half its members are Mizrahim, willing to keep an eye on all the figures who adorn Israel's banknotes to ensure they include individuals who came from the right countries. Set an objective, a fair ethnic target – and I will fight to see it realized so that we can get rid of this demon at last.

Taking care of the disadvantaged populations is a mitzvah. There are development towns in which it is tough to escape social circles; there are cliques in the legal system, the media and the academe that are harder to penetrate if you weren't born with a sliver spoon in your mouth.

There are endless problems even without the ethnic demon. There are numerous successes with it. Let it go.