Rabbi Mayer Alter Horowitz. 'Why give them equality? Because of their tendencies?'

A prominent American Hasidic rabbi says the LGBT community is not entitled to equal rights, just like it would be unthinkable for murderers to unite and demand rights regarding their violent tendencies.

Grand Rabbi Mayer Alter Horowitz, the Rebbe of the Har Nof branch of the Boston Hasidic dynasty, made the comment during a rare press conference at his Jerusalem home, in which he declared that Eli Yishai's Yachad–Ha'am Itanu party can be considered an ultra-Orthodox party and should receive the votes of members of the haredi sector who feel misrepresented by Shas and United Torah Judaism.

The Rebbe ruled that haredim must not vote for the Bayit Yehudi party due to its part in the IDF draft law, which imposes criminal sanctions on certain yeshiva students who don't serve in the army, and because it is in favor of granting civil rights to same-sex couples.

The Rebbe stressed that he was aware of the distress of the LGBT community members, particularly the religious ones, but that violating the Torah's commandments was unthinkable. "Just like we have agunot (women chained to their marriage) – isn't that unfortunate? Don't we want to find a solution? If we have a solution, we implement the solution. If we don't have one, we don’t." 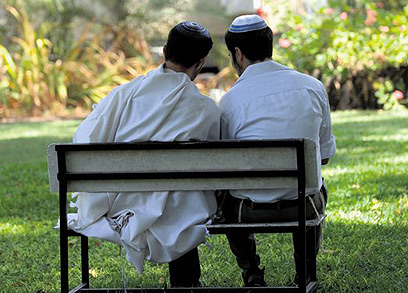 Sometimes a person had to sacrifice himself for things which are fundamental in Jewish life, rabbi says (Photo: Haim Hornstein)

He added that only 2-3% of the public had homosexual inclinations, and that religious gay men had two options: To suppress their sexual desires or marry a woman. "Some women want sons, and they don't care how they do it," he said. "Some women don't really want a relationship with a man, so it's possible." He stressed, however, that they must be informed about the inclination, "just like any other shortcoming."

'I believe in democracy'

The Rebbe said he had personally met haredi homosexuals who chose the solutions he suggested. "I know observant guys who I wanted to offer a match, and they refused. They likely refused for that reason. But they lived in total devotion, to protect the Torah. Sometimes a person has to sacrifice himself for things which are fundamental in Jewish life.

"I personally know one man who really has these tendencies. He got married and had sons, and they already have their own sons. I don’t know how it works. I don’t know if he changed his reality. I have spoken with psychologists. There is a division of opinion between psychologists over whether this reality can be changed or not." So how does it work? "For example, when a person enters a mikveh (ritual bath) of cold water. He is uneasy and doesn’t like it, but he does it because he believes he wants to go to the mikveh," the Rebbe estimated. "So it's the same if one wants to observe the the mitzvah of procreation. It could be the same situation." Despite his intolerance towards the LGBT community's fight for equal rights, Rabbi Horowitz defined himself as a person who "believes in democracy" and admitted that the rabbinical and religious world has failed in providing a Jewish-halachic response to the complexity involved in the existence of a state. "Thank God that we don't have a majority in the government," he said. "I fear the day when we have 61 Knesset members. For example, I don’t know how the airport could be closed on Shabbat in the modern world. Thank God that no one is asking me such questions."