Likud is dodging a debate on its performance

It's kind of amusing putting dock workers, Israel Broadcasting Authority workers and Hamas in the same group of people who have been hurt by the Likud's policies.

Because Alon Hassan, the chairman of the Ashdod Port workers' union and one of the strongest dock workers' leaders in the past decade, brought the Likud more than 1,000 new members. He is the Likud's own flesh and blood. He took part in power struggles within the Likud.

And a Hamas member, as we know, should be thanking Prime Minister Benjamin Netanyahu more than anyone. Why it was the Netanyahu government which released more than 1,000 terrorists, hundreds of whom had blood on their hands, many of whom were Hamas members.

The IBA workers remain alone. They have the right to be angry, after the Netanyahu government imposed a director-general who everyone agreed was unsuitable for the job. 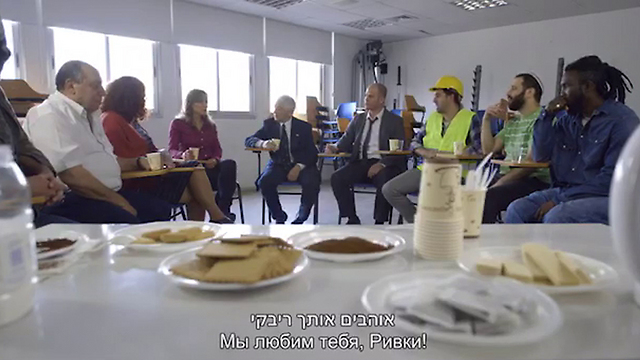 The controversial Likud clip. A march of delusions (screenshot)

So on second thought, it's not funny. It's sad. But that's the precise logic behind this campaign. There is a need to present blatant lies, spins, pranks, delusional propaganda clips so as not to deal with the fundamental problems – the cost of living, the housing prices, Netanyahu's statements that the surrender to the haredim is returning in full force, if only we let him be prime minister, the fact that there is a bloc of Knesset members in the Likud who are even more right-wing than the Bayit Yehudi party and whose declared goal is to establish one big state here.

It's the Likud's right to say: This is what we are. We are in favor of a free market with no organized labor. We are in favor of aggressive capitalism in which a "hidden hand" takes care of raising the housing prices across the country, and the same hand paves roads to isolated outposts with huge budgets of hundreds of millions of shekels. That's the Likud. That's its approach.

It's definitely the Likud's right to decide on such a list of priorities, just like it's the Likud's right to restore the fund transfers to yeshivot and yeshiva students, and destroy the equal share of the burden and implement the Hamas platform which demands the establishment of one big state. But saying that a Hamas activist and Alon Hassan are unsatisfied with the Likud – that's no longer a spin. That's a march of delusions.

The Likud has been ruling the country for many years. The Likud has achievements and failures. They can be discussed. They should be discussed. But this extremely baseless and puzzling video was created in order to continue the consistent line of escaping a real discussion.

So the apology isn't accepted. Because was goal was another diversion, and it was achieved.