Op-ed: Joint Arab list's refusal to sign vote-sharing agreement with Israel's most leftist party proves that its leaders' real goal is not equality for Arabs.

Hypocrisy has a positive side too, because hypocrisy contains some kind of shame in it. Racists are sometimes aware of the serious flaw in their views about members of a different descent, color or religion. They hide their racism out of a sense of shame.

Let's not disregard this kind of hypocrisy – it's a crucial ingredient in a society which is going through processes of change. It also applies to Jews who don’t exactly like Arabs, or Arabs who don’t like Jews.

In the past two months, the joint Arab list has managed to give the appearance of a democratic party which supports Jewish-Arab coexistence. Good and innocent Jews, as well as not so good and not so innocent ones, joined the campaign aimed at turning the Arab list into the democratic camp.

The list's chairman, Aiman Uda, became the party's display window, with a smiling campaign, showing empathy towards the Jewish sector. We shouldn't have forgotten the fact that he was the man who headed the committee for preventing young people from joining military, national or communal service, but the actual declaration about a desire to promote coexistence and equality is a positive thing.

But several days ago the hypocrisy disappeared too, and what a shame. There is no democratic Arab list. There is a nationalistic and Islamist list. Under the pressure of Balad's Islamist and nationalistic members, the party decided that there is no room for a vote-sharing agreement with Meretz, because the latter is a Zionist party. Meretz, it seems, hasn't received such a compliment for years. In recent years, one has to admit, according to some of the voices coming out of the party, it likely didn't even know that it was Zionist. 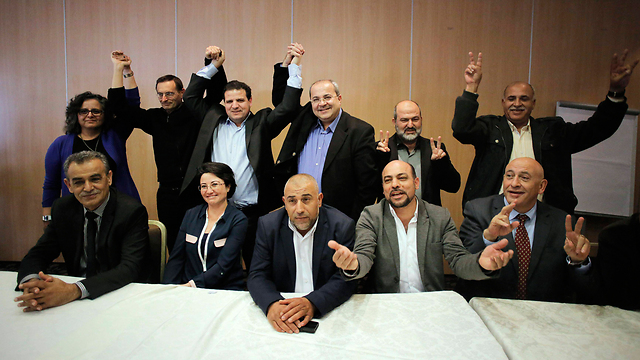 Despite the decision, let's not say that "all Arabs" are nationalistic fanatics. What happened here is something which happens many times in the Muslim and Arab world: The fanatics are usually the ones who impose their opinion. They are more determined. They are more intimidating and frightening. Many Arabs are already protesting the decision. The problem is that the thugs win.

In addition, the combination between nationalistic and Islamist people characterized a large part of the Arab world. There are many disagreements between the camps, but there is unanimity over one thing: The hatred towards Israel. This combination is succeeding in imposing itself on the joint list as well.

We should also pay attention to the coexistence component. Who did the joint list lash out at? Not the Likud. Not Avigdor Lieberman. It lashed out at the party which represents the most leftist part of the Jewish sector. A party whose activists are the spinal cord of many NGOs which are leading campaigns that have repeatedly crossed the line between legitimate criticism and anti-Israel incitement. A party which, in almost every dispute with the Palestinians, has stood by the Palestinians. Why Meretz Chairman Zehava Galon has systematically erased the line separating between Meretz and Hadash.

The Arab sector has excellent claims against Israel's governments throughout the generations, but the Israeli Arabs' leadership is the Israeli Arabs' tragedy. It clarifies that the goal is not equality or coexistence. The goal is constantly undermining the fulfillment of the basic principle of self-determination. It's not that they are in favor of rights for Arabs. They are mainly against rights for Jews.

We should remember that there is a big Arab public – which is the majority – of loyal, working and taxpaying citizens. They deserve equal rights. This majority should engage in self-examination, because a vote for the joint Arab list is a vote against equality and against coexistence. Such a vote is bad for the Jews, but it's even worse for the Arabs.