Israel is at a historical crossroads
Photo: Reuters

Op-ed: Election campaign has been dealing with symptoms rather than root problems Israel is facing. Candidates focus on needs of our First World military, while Third World education given to Israeli students would leave them trailing behind, unable to sustain such an army.

We are in the final straightaway to the national elections, and dealing with the symptoms – in the best case – instead of the root problems and a long term vision. This is true in both the national security and socioeconomic realms. The paradigms have changed, but the discourse is still a generation behind.

Israel is at a historical crossroads. It is home to some of the world’s most innovative private sector companies as well as to some of the leading scientists and physicians. At the same time, a very large – and increasing – share of the population is being left behind.

There is a growing dichotomy between those at technology’s cutting edge and those in the expanding population groups who receive inadequate tools and conditions to work in a modern economy. This dichotomy is reflected in high rates of income inequality and poverty as well as in low productivity, the key ingredient in determining wages and in generating sustainable long-run economic growth.

The gap in labor productivity between the leading developed countries and Israel has been rising steadily for over four straight decades – with major consequences regarding the country’s future ability to retain its most skilled. Already today, 50 percent of the population pays no income tax while just 20 percent account for 90 percent of all income tax revenue. 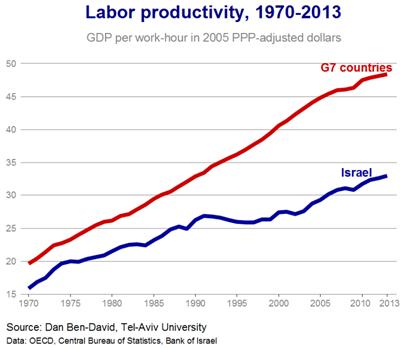 Instead of focusing on the fundamentals, our politicians argue about the number of Palestinians living in the West Bank within the context of whether or not its annexation will affect the country’s Jewish majority in the future. This is not the relevant question. Already today, roughly half of Israel’s pupils within the pre-1967 borders receive an education in core subjects that is below levels provided in many underdeveloped countries.

These tend to be children in the large and fastest growing segments of Israel’s population – be they Jewish or Arab. Aside from the obvious economic and social ramifications, it should be clear that a Third World education will lead to a Third World economy, which cannot support the First World army that Israel needs to physically survive in its extremely hostile neighborhood.

The demographic issue has long since stopped being the number of Jews versus the number of Arabs: an outdated discourse on the issue of annexing 1.8 or 2.3 million Palestinians, most of whom are poorly educated. The relevant demographic paradigm is the share of Israel’s future population that will be educated and skilled. Similarly, national security is not just jets, tanks and battalions. It requires a civil society capable of sustaining a flourishing and innovative economy that can support Israel’s existential needs. Internalization of this fact involves a tectonic shift in Israel’s national security paradigm.

The fact that Israel is becoming increasingly isolated in the world is not just due to heightened anti-Semitism. Young educated Jews in the West are losing interest in us and this has tremendous strategic implications for our future. The way to their hearts passes through our acts and policies that will persuade our most able and educated children to remain here.

Both the crew and the passengers of our Titanic need to move from the endless shallow and superficial arguments about rearranging the deck chairs towards charting a significant change in direction for our entire ship. The time has come to distinguish between symptoms and policies dealing with the root issues. This is a Ben-Gurion moment requiring leaders with the vision, knowledge and courage to change outdated paradigms.

Professor Ben-David is an economist at Tel-Aviv University.