In ideological battle against Islamist terrorist groups, Cairo removes from national curriculum iconic stories of Saladin and Uqba ibn Nafi, saying that they 'encourage acts of violence' like ISIS.

Cairo announced in recent days its intention to remove iconic stories of Islamic leaders like Saladin from school curriculums, a decision which has sparked controversy across the most populous Arab country.

The Egyptian Education Ministry move to cut materials that they say "encourage violence" is part of a larger ideological battle waged by President Abdel Fattah el-Sisi and the country's senior clerics against the violent brand of Islamic extremism practiced by radical groups like that Islamic State and the Muslim Brotherhood. 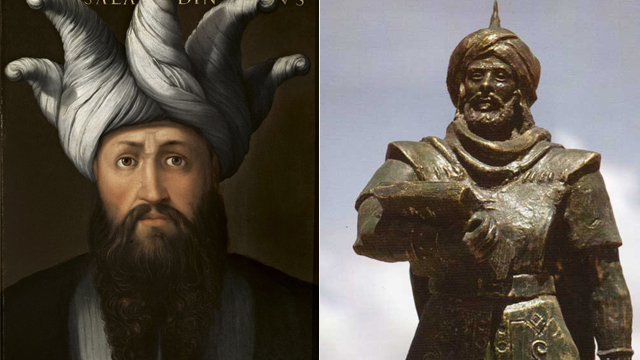 Sisi has led a multi-front war against violent fanaticism using the country's military, legal, and security infrastructure, with an increased sense of urgency following ISIS' beheadings of 21 Egyptian Copts.

As part of the landmark decision, the biography of Saladin – the legendary Sunni leader who "liberated" Jerusalem from the Crusaders in 1187 – will not be included on the list of topics to be covered by Egyptian teachers.

The story of, one of the Islamic world's iconic heroes, has been officially dropped from the curriculum of fifth-grade classes across the country. In addition, the biography of Uqba ibn Nafi, another heroic figure in Muslim tradition, was partially removed from seventh-grade curriculum. Ibn Nafi began the first Muslim conquest of the Maghreb region of North Africa. The harsh decision to censor Islamic history rocked Egypt in recent days, especially its Islamist elements. The Education Ministry rushed to explain its decision. "The cut backs have two reasons: The first is that some of the material was inciting violence and was first entered into the curriculum during the Muslim Brotherhood's era, the second is to simply relieve the burden on the student," said a ministry spokesperson to London-based Arabic newspaper Asharq Al-Awsat. The spokesperson's statement, however, took a considerably more conciliatory tone than the original Education Ministry announcement which claimed a cleansing of the curriculum. The education reform attempt angered several leading Egyptian historians and political figures who said the move had not been properly vetted and that removing the material from the curriculum distorted history. "The decision to stop teaching the stories of Saladin and Uqba ibn Nafi hurts our own history and erases our identity," said a central member of Al-Nour, a Salafi party which took part in the overthrow of the Muslim Brotherhood and received the largest amount of seats in the post-coup parliament. Unlike the emotionally-charged statements of political Islam advocates, Radhi Saad, a professor of Islamic history at Al-Azhar University, tried to logically explain why the decision was irrational.

"The stories of Saladin and Uqba ibn Nafi contain concrete historical facts that cannot be denied. One liberated Jerusalem and the other conquered Africa. The history of Islam, of the Arabs, and of Egypt wins respect and there is no cause for concern," he said.

In response to the outrage, the Education Ministry said that the chapters removed from the story of ibn Nafi do not affect the development of the tale. But by then the storm had taken over Egyptian media, and the anti-Sisi outlets used it to hammer in their opposition.