Palestinian leader urges Arab League to carry out intervention 'policy in Palestine, Syria, and Iraq as in Yemen.'

The 26th Arab League Summit opened Saturday in Sharm el-Sheikh on Saturday as Arab states gathered to discuss the region's many questions – the Saudi-led campaign in Yemen, the fight against Islamic State militants, talks to form a united military force, and of course, the Israeli-Palestinian conflict.

Palestinian President Mahmoud Abbas caused a furor before he even made a speech, when he used the strikes in Yemen as an opportunity to slam Hamas: "I hope the Arab states carry out the same policy that they are in Yemen in the case of all Arab nations that suffer from internal conflicts – such as Palestine, Syria, Libya, and Iraq."

Abbas's statement came a day after his associate, Mahmoud al-Habash, declared that Arab countries must mobilize and hit Hamas with an iron first because it led a coup in Gaza. 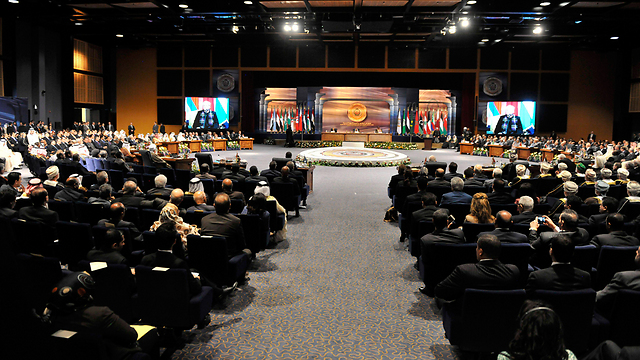 Arab League summit in Egypt
Opening the summit was Yemen's embattled president, Abd Rabbuh Mansur Hadi, who fled besieged Aden last week and travelled to the Sinai through Saudi Arabia. He said that the "Decisive Storm" waged by the Saudis should continue until the Houthi rebels wave a white flag and surrender. "I tell Iran's puppet ... 'You are the one that destroyed Yemen with your political immaturity', Hadi said. Prior to the beginning of the summit, Hadi held a meeting with King Salman of Saudi Arabia and Egyptian President Abdel Sisi at the Sharm-el-Sheikh International Airport. Meanwhile, the fighting goes on in Yemen.

This year's summit of the Arab League, which is marking 70 years since its founding, has a particularly urgent character given the many developments in the region – chief among them the operation led by the Saudis in Yemen against the Shiite rebels. Another burning issue is the formation of a joint Arab force approved by the Arab League's foreign ministers on Thursday, whose mission will be to fight against terror groups, especially the Islamic State.

Other subjects on the agenda are the Palestinian situation and the ramifications of Israeli elections on the Palestinian Authority's policy. The summit is expected to support the submission of another draft proposal to the UN Security Council about "ending the occupation." The still-developing agreement on Iran's nuclear program is also likely to be discussed.

22 Arab nations will participate in the summit, which will continue for two days. 14 heads of state, kings, and princes lead their countries' missions.

Sisi said there was no other choice but to combine all efforts to fight the danger posed by terrorist groups. He praised the decision to create a united force: "We need a joint Arab military action," he said. He added that the Palestinian issue is the key to regional stability. "The Arab region faces an unprecedented challenge to its identity and its existence," he said.

Saudi King Salman said that "Operation 'Decisive Storm' will continue until the Yemeni people attain stability," and stressed that the Shiite rebels must hand their weapons over to the state. Sheikh Tamim bin Hamad Al Thani, the emir of Qatar, is also participating in the summit. Relations have become tense between Qatar, a supporter of the Muslim Brotherhood. The emir and Sisi held a meeting before the summit to discuss their issues. Syria's seat will remain empty this year, following the League's decision to freeze Syria's membership in the organization because of its civil war.

The Palestinian issue was discussed, but was not the top priority. However, the League's president, Nabil Elaraby, mentioned the draft proposal to "end the occupation" and said that "the possibility of establishing a just, inclusive peace is in danger as long as the Security Council does not act. The region will not enjoy peace and security as long as the Israeli occupation remains unchanged."