LAUSANNE - World powers appeared Saturday to be narrowing in on a deal to stop Iran acquiring a nuclear bomb, with marathon talks stretching into the evening as Iran's foreign minister voiced confidence the final hurdles can be overcome. "We're moving forward," Mohammad Javad Zarif told reporters after meeting separately with his German and French counterparts who flew into Lausanne, Switzerland on Saturday to join the negotiations. "I think we can in fact make the necessary progress to be able to resolve all the issues and start writing them down in a text that will become the final agreement once it's done," Zarif said.

Meanwhile, US Secretary of State John Kerry canceled plans Sunday to return to the United States, for an event honoring his late Senate colleague Edward Kennedy, in order to remain at the talks. 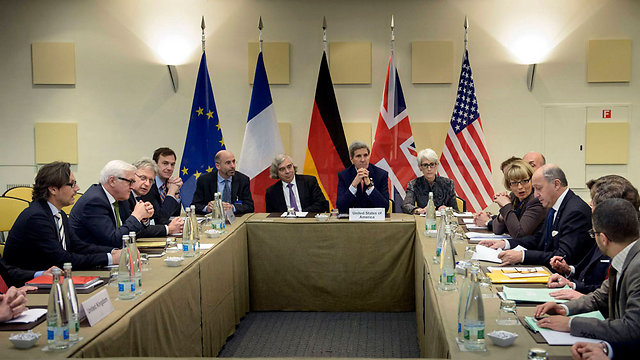 Talks in Lausanne on Saturday (Photo: Reuters)
Iran and six world powers aim by Tuesday to agree the main contours of a deal reducing Iran's nuclear program in exchange for sanctions relief and ending a more than decade-old standoff. A full agreement is due by June 30. France's top diplomat Laurent Fabius, the most hawkish in the P5+1 group of countries negotiating with Iran, said he wanted a "robust deal" with close oversight to ensure no violations.

German Foreign Minister Frank-Walter Steinmeier said the talks had entered their "endgame" but also warned this would also be the hardest stage.

Russia's chief negotiator, Sergei Ryabkov was quoted by the RIA Novosti news agency as saying the chances of a deal were "more than 50/50".

On Twitter, EU foreign policy chief Federica Mogherini, who arrived in a rainy Lausanne late Saturday, said negotiators "have never been so close to a deal" but added there remained "critical points" to resolve. 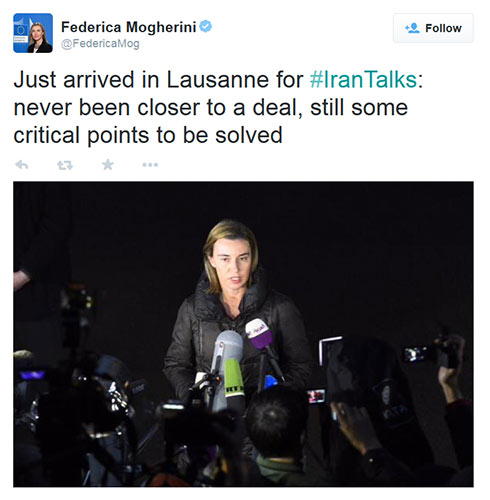 The powers want Iran to shrink its nuclear program and impose unprecedented inspections in order to make any covert dash to a bomb all but impossible. Russian Foreign Minister Sergei Lavrov and Chinese counterpart Wang Yi were reportedly due to join the talks on Sunday. Britain's Philip Hammond was on stand-by. "It was important that ministers began to arrive... We expect the pace to intensify," a senior US official said. "The brinksmanship in these negotiations will no doubt continue until the eleventh hour," said Ali Vaez, an expert at the International Crisis Group.

The Iranians "like to negotiate on the edge of a precipice. They're very good at it," a Western diplomat said.

The deal the negotiators are trying to put together is highly complex and two deadlines last year to turn an interim accord reached in November 2013 were missed. "Everything is linked. If all the technical issues are resolved and the questions tied to the sanctions are not, then there is no deal," said Iran's nuclear chief Ali Akbar Salehi.

Late Saturday he went into a third meeting of the day with US Energy Secretary Ernest Moniz working out the technical nuts and bolts of how a deal might work, Salehi's deputy said. 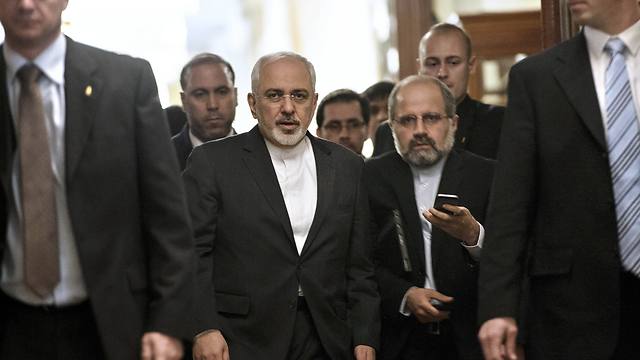 Iranian Foreign Minister Zarif in Lausanne (Photo: AP)
The sequence of sanctions relief and Iran's development of faster machines called centrifuges to make nuclear fuel -- but which can also produce the core of a bomb -- are proving particularly thorny. The UN has imposed several rounds of sanctions since 2006 aimed at stopping Iran from expanding its nuclear and missile programs while EU and US sanctions since 2010 have targeted its oil exports and financial system. Iran wants the sanctions lifted immediately but global powers insist on a gradual phasing out of sanctions over many years to ensure Iran sticks to its commitments. The issue of UN sanctions is proving particularly thorny. It remains unclear what form any deal to emerge from the Lausanne talks would take. Kerry is under pressure to return from Lausanne with something concrete to head off a push by Republican lawmakers to introduce yet more sanctions, potentially torpedoing the whole negotiating process. There are also wider issues at play. Russia's Ryabkov said US-supported airstrikes by Iran's foe Saudi Arabia on Iran-backed rebels in Yemen was "having an impact on the atmosphere" in Lausanne. "We hope that the situation in Yemen will not bring about a change in the position of certain participants," he said.