While overall number of incidents represents one of lowest totals reported by Jewish group since 1979, audit identifies new trends in anti-Semitic acts, including hacking attacks on community and synagogue websites from overseas, which multiplied last year.

The total number of anti-Semitic incidents in the United States increased by 21% in 2014, in a year marked by a violent anti-Semitic shooting attack targeting Jewish community buildings in Kansas and anti-Jewish expressions linked to the war in Gaza, according to the annual Anti-Defamation League’s (ADL) Audit of Anti-Semitic Incidents.

The Audit, issued Monday, counted a total of 912 anti-Semitic incidents across the US during the 2014 calendar year, which represents a 21% increase from the 751 incidents reported during the same period in 2013 and is the first time in nearly a decade of declines where the overall number of incidents has substantially risen.

"While the overall number of anti-Semitic incidents remains lower than we have seen historically, the fact remains that 2014 was a particularly violent year for Jews both overseas and in the United States," said ADL National Director Abraham H. Foxman.

"The fatal shootings in Overland Park, Kansas at a Jewish community center building and senior residence by a white supremacist whose goal was to 'kill Jews' and other violent episodes were tragic reminders that lethal anti-Semitism continues to pose a threat to American Jews and larger society as well."

Despite the increase in incidents, the total number of anti-Semitic acts still represents one of the lowest totals of anti-Semitic acts reported by ADL since it started keeping records in 1979. Still, the Audit has also identified new trends in anti-Semitic incidents, including the phenomenon of hacking attacks on community and synagogue websites by overseas hackers, which multiplied in 2014. 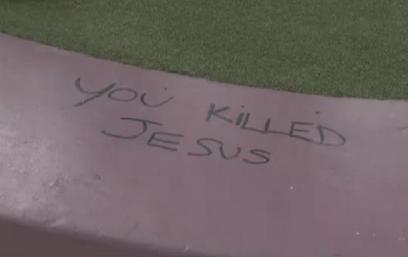 The 2014 calendar year was marked by several violent episodes – most notably, the shooting attack at two Jewish institutional buildings in Overland Park, Kansas carried out by a white supremacist who admitted in a jailhouse interview that he wanted to target and kill Jews. It was the first time a Jewish institution has been singled out by a lone-wolf-style gunman since the 2009 shooting at the US Holocaust Memorial Museum in Washington, DC.

The ADL Audit cited a marked increase in anti-Semitic incidents during the 50 days of conflict between Hamas and Israel beginning with air raids on July 7 and into the subsequent ground invasion in Gaza to root out Hamas rockets and tunnels. Anti-Semitism manifested on the fringe of anti-Israel movements during and after Israel’s Operation Protective Edge as Jewish individuals and institutions became the targets of anti-Semitic rhetoric and acts of vandalism.

The annual ADL Audit encompasses incidents of assault, vandalism and harassment targeting Jews and Jewish property and institutions and includes both criminal and non-criminal incidents reported to ADL's 27 regional offices across the country and to law enforcement.

In 2014, anti-Semitic incidents were reported in a total of 38 states and the District of Columbia. Those incidents are categorized in the ADL Audit as follows:

"The reported increase in US anti-Semitic incidents coincided with a huge upsurge in anti-Semitic attacks in Europe and elsewhere around the globe,” said ADL National Chair Barry Curtiss-Lusher. "A number of Jewish communities, including those in France, Great Britain and Austria reported a doubling of anti-Semitic incidents over the previous year due to the conflict between Israel and Hamas. While the Jewish community here did not experience anything like the attacks overseas, the Gaza war did have an impact in terms of creating a momentary spike in incidents in the US."

Continuing a consistent trend for many years, the states with the highest totals of anti-Semitic incidents were those with large Jewish populations. Once again, New York and California topped the list:

Anti-Semitic activity during the Gaza war

While the ADL Audit does not include criticism of Israel or Zionism, such reports are included when they cross the line from legitimate criticism to anti-Semitism by invoking classic anti-Jewish stereotypes or inappropriate Nazi imagery and/or analogies.

Public expressions of anti-Israel sentiments that demonize Jews or create an atmosphere of fear or intimidation by targeting Jewish individuals or institutions in the US are counted. Such anti-Semitism was evident at many of the anti-Israel demon-stra¬tions held in cities through¬out the US. Here are some examples of incidents linked to the Gaza conflict:

The ADL Audit reported an uptick in the number of online attacks by foreign hackers targeting the websites of synagogues and other Jewish organizations.

"Jewish websites in the US have become a common target for hacker groups in the Arab and Muslim world," said Curtiss-Lusher. "While past hacking efforts against Jewish institutions have mainly focused on the Israeli-Palestinian conflict, the more recent attacks are being carried out in the name of the Islamic State."

General anti-Jewish expressions on the Internet, while possibly playing a role in fomenting real-world anti-Semitism, are not counted for the purposes of the Audit unless they target a specific individual or institution.

"We know that online hate remains a serious problem, particularly on social media, where anti-Semitic hashtags such as '#HitlerWasRight' and other offensive messages became trends during the last year," said Foxman. "We have challenged Internet and social media providers to address this issue head on, and will continue to work with our partners in the industry to help them adopt community standards that will shut down hateful, racist and offensive speech before it goes viral."