Netanyahu speaking against the Iran deal on US television.
Photo: GPO

Op-ed: Netanyahu should accept the American offer of dialogue on the draft agreement reached in Lausanne, instead of signalling his intent to scupper it out of hand.

The document approved in Lausanne is full of loopholes and lacks numerous details. There's a great deal of exhausting work to be done before the talks are completed, and we can expect some tough battles over the coming months before the formulation of a final agreement.

Nevertheless, US President Barack Obama was right in labeling the document a "historic" one – and for the following reasons:

1. For decades, Iran rejected the international community's demand to hold talks of any kind with respect to its nuclear program. The interim agreement reached in Lausanne proves that Tehran capitulated, by agreeing to conduct negotiations about its plans and the nuclear infrastructure it has built up for years, primarily in secret.

2. Iran was forced to agree to the curtailment of its programs, the destruction of valuable equipment at some of its facilities, and a drastic reduction in the number of centrifuges that will remain in operation. The vast majority of the centrifuges will be removed from the production sites and stored in known locations under international supervision. The new centrifuges will be removed from the existing facilities and stored under international supervision. 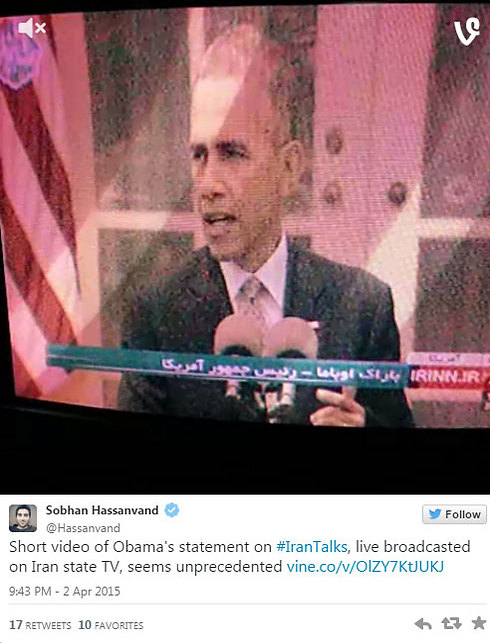 3. The Fordow facility will be left with just 1,000 of its more than 6,000 centrifuges, and these will be used for research and development for civilian purposes only, under international supervision. No fissile material will remain in Fordow, and uranium-enrichment operations will not take place there for a period of 15 years.

4. Iran was forced to agree to an unprecedented regime of international supervision and monitoring of its nuclear facilities and the dismantling of critical systems. The facility in Natanz will be left with approximately 5,000 old-model centrifuges, and 1,000 new ones will be removed from the site and stored under supervision. The Arak reactor will cease production of plutonium, the original core of the reactor will be destroyed or removed from the country, and the facility will be used for research and development programs only with the approval of the superpowers.

5. Iran has agreed to not enrich uranium over 3.67 percent for at least 15 years. It has also agreed to reduce its current stockpile of about 10,000 kilograms of low-enriched uranium to just 300 kilograms. The surplus quantities will be removed from the country or handled in a different manner, but will not remain under Iranian control.

6. Iran has agreed to implement measures, the details of which have yet to be finalized, to meet the demands for clarification with respect to trials it has carried out in the field of nuclear weapons systems.

7. Obama's speech following the signing of the framework agreement was broadcast live on Iranian state television without any censorship or breaks in the middle. Never before, since the Islamic Revolution, has an American president been afforded such a stage, and on such a sensitive subject to boot.

And thus President Obama could say there is a historical dimension to the agreement that was reached. Anyone who has followed events in Iran in recent decades or has studied the matter has to admit truthfully that he never believed Iran would ever agree to discuss these issues, let alone agree to each of the clauses I have mentioned.

According to the introduction to the understandings reached, "Important implementation details are still subject to negotiation, and nothing is agreed until everything is agreed."

This statement, along with Obama's open invitation to Prime Minister Benjamin Netanyahu to enter into an intensive dialogue, affords the Israeli government the opportunity to improve the agreement in its final version. However, Israel's hasty response – its total rejection of the memorandum of understanding – seems to herald the beginning of an Israeli campaign designed to thwart the deal. Scrapping the deal would of course mean scrapping all the understandings already achieved.

You can't have your cake and eat it too; you can't conduct an all-out war against the president to thwart his historic achievement and, in the same breath, hold talks with him to improve the product. Moreover, taking the fight to Congress would require deeper Israeli intervention in the approaching elections in the United States.

One of the arguments being voiced against the continuation of the talks is that Iran has a history of lies and cunning, and can thus be expected to breach the agreement and deceive the world. True, the Iranians have a tendency to deceive, but they could do so even if they agreed to zero centrifuges, the closure of all their nuclear facilities, and supervision on the part of the Mossad itself.

Loopholes can always be found, so there is no such thing as a "good agreement." The Iranians will uphold an agreement only if it is worth their while.

Netanyahu has raised a new demand – that the framework agreement should include Iran's recognition of Israel's right to exist. Clearly, Iran is not going to change its spots; therefore, anyone who voices such a demand is signaling that he doesn't want the agreement and has his eyes on an aggressive solution.