52-year-old PFLP member being held under Israeli administrative detention after violating Israeli ban on entering Ramallah, where she lives.

The IDF has placed a female Palestinian legislator under detention for six months without trial, a lawyer for the lawmaker said Monday.

Khalida Jarrar, a senior political leader of the Popular Front for the Liberation of Palestine, a left-wing Palestinian militant group, is being held for alleged activities in a hostile organization, lawyer Mahmoud Hassan said. Jarrar, 52, is being held under Israeli administrative detention, which allows Israel to hold detainees for up to six months at a time without charges, the lawyer said. The detention and any extensions are approved by a judge, and evidence can be kept from defense lawyers. 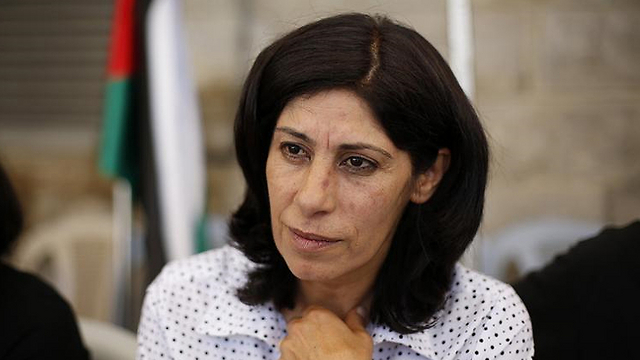 The IDF arrested Jarrar last week for disobeying an Israeli order barring her from the West Bank city of Ramallah. The military said her arrest was due to "substantial concerns about the safety and security of the region."

The military said it arrested Khalida Jarrar, a senior political leader of the Popular Front for the Liberation of Palestine, early Thursday due to "substantial concerns about the safety and security of the region."

Last year, the military confined her movement to the city of Jericho and its surroundings. The army said the restraining order was based on her "incitement and involvement in terror." It gave no further details.

Her husband, Ghassan Jarrar, said last week that she had been arrested from their Ramallah home. She had long flaunted the Israeli ban. The military had no immediate comment Monday on the six-month detention order.

A Palestinian prisoners' advocate, Qadoura Fares, called the arrest a punitive political act by Israel. He said Israel is holding 16 Palestinian lawmakers in jails, most of them administrative detainees who are members of the Islamic militant group Hamas.