Arab states and the Iran deal - it's complicated

Analysis: In the battle between Sunni Saudi Arabia and Shiite Iran, Israel only has a secondary role to play.

At first glance it seems the Arab world in general firmly opposes the framework deal that was signed with Iran last week. It is easy to see why: Shiite Iran aspires to be a regional power that rules over the Persian Gulf, thereby undermining the hegemony of Saudi Arabia and the Gulf states.

In other words, the center of tension in the Middle East is the competition between Saudi Arabia and Iran, and any thaw in US-Iran ties is a threat against the Sunni Islam states, headed by the Saudis. “The deal is a disaster,” a Saudi spokesman said last week.

However things are not as simple as they appear at first glance. Firstly, the Arab media is very much controlled by Saudi money. Newspapers such as the London-based Asharq Al-Awsat as well as the prominent Al Arabiya News TV channel have fiercely criticized the deal. 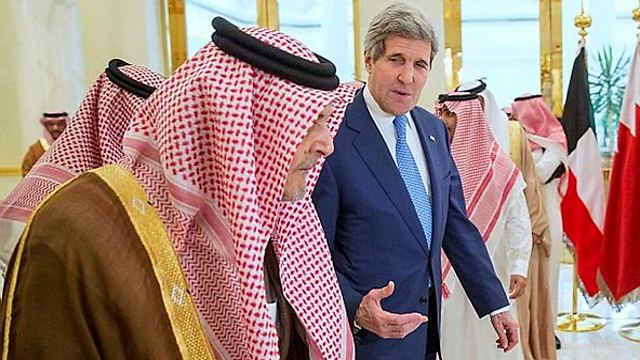 “We have made a grave mistake for not demanding to participate in the negotiations,” wrote Arab journalist Salman al-Dorsi, who claims, like many, that the US-Iran deal will be at the expense of the Saudis and the Arabs.

If we take Saudi Arabia out of the equation, the rest of the Arab world is not as hysterical. Iran’s ally Syria supports the deal. So does Shiite Hezbollah in Lebanon. The Jordanians are not overly upset as well. Jordan’s Foreign Minister Nasser Judeh even visited Tehran last week.

Egypt is more cautious. The Egyptians have other concerns regarding the Islamic State's terrorism and other zealous factions such as Ansar Beit al-Maqdis. Iran is fighting those groups in Syria and Iraq so from this perspective Iran and Egypt are allies. Jordan and Lebanon are also more worried by the Sunni extremists than by Iran.

And the Americans? Which side do they support in the fight between Saudi Arabia and Iran? When the former editor-in-chief Herbert Pundik of the Danish daily Politiken was asked that question he answered: “The Americans are doing what is good for the Americans.”

Apparently he is right. On one front –Yemen – the US is aiding Saudi and its allies against the Shiite Huthis, thus operating against Iran. But on the other front – the Syrian front – the US is helping Iran in the war against the Muslim zealots that are being supported by the Saudis.

In light of the concern and panic, US Secretary of State John Kerry visited Riyadh and tried to reassure Gulf foreign ministers about the framework agreement with Iran.

According to at least one source, the pan-Arab Al-Hayat newspaper, the possibility of the US offering a nuclear umbrella for the Gulf was considered in the meeting. Whether this report is true or not, it is clear that Saudi’s King Salman has his diplomatic response to the Iran deal ready.

He invited Pakistan’s Prime Minister Nawaz Sharif for a discussion on how nuclear Pakistan could help in the development of a potentially nuclear Saudi Arabia. The Saudis have even considered buying weapons from Russia – a move that the US regards as a provocation. King Salman also tried to reconcile with Egypt and Turkey in order to create a united Sunni front.

The picture emerging from US foreign policy in the region is an attempt to create some sort of balance between the Saudis and their Gulf partners, and Iran and its partners in Syria and Iraq. Such a balance would allow the Americans to work between the two blocs in a way that would prevent escalation in the region. In the long run, it is more likely that Iran will come out on top.

Iran has a large middle class with a satisfactory level of education. It holds elections and its society is dynamic with aspirations for modernization that can in the future bring about the downfall of the ayatollahs' regime and the rise of a more open and progressive regime. The rulers of the Saudi and Gulf states have one goal in mind: hold on to the monarchy and the huge oil profit.

In this picture Israel does indeed have a secondary role. The Iranian declarations regarding its intention to destroy Israel are not necessarily due to a Muslim ideological stance, but are rather an attempt to create sympathy for Iran among the Arab states that are hostile towards Israel.

If Israel manages to secure a peace accord with the Palestinians and the Arab world, it is highly likely that Iran’s stance against it will soften.

Danny Rubinstein lectures on Arab issues at Ben-Gurion University and the Hebrew University of Jerusalem, and a columnist on Palestinian economic issues at Ynet's sister publication Calcalist.