New UK campaign invites celebrities and public to record themselves reading one-minute extracts from Jewish girl's diary about life in hiding from Nazis and post their videos online under #notsilent hashtag.

Young diarist Anne Frank was remembered through her own words rather than a minute's silence on Tuesday, in a new UK campaign to commemorate 70 years since her death in World War II.

The Anne Frank Trust UK has launched a social media campaign called #notsilent in which celebrities and the public are invited to record themselves reading one-minute extracts from her diary about life in hiding from the Nazis and to post their videos online under the hashtag.

At a ceremony at London's British Library, school children read from Frank's "Diary of a Young Girl" and Holocaust survivor Freda Wineman recalled being at Auschwitz and Bergen-Belsen concentration camps at the same time as the teenage Jewish girl.

"Seventy years – it doesn't seem possible but some of us are still around to keep the memory alive," Wineman told Reuters.

"The young generation mustn't forget and I think through her book and through her wonderful writing, there is a message that she gave already, without knowing, to the future generation that they must take note of what's going on around them."

Frank and her family lived in a secret annexe in a house in Amsterdam. They were discovered in 1944, and Frank died aged 15 at Bergen-Belson in 1945. Her diary was published two years later and has since been read worldwide.

"We all looked terrible. We all looked horrible. You know we were without hair, we're starving, we were with boils, we were ill," Wineman said of their time in the camp. "Some of us survived with all that, but others just couldn't take anymore. The typhus got them." 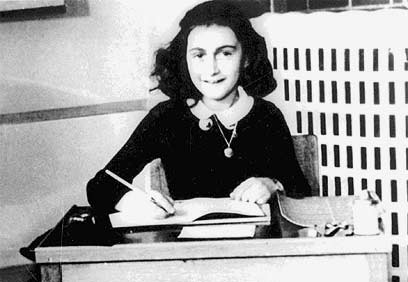 Anne Frank. 'Her voice has resonated across the generations in the 70 years since she died, and she's inspired people to actually speak out in her memory and try to make the world better' (Photo: AP)

British actress Naomie Harris and children's author Jacqueline Wilson are among those who have already recorded readings in Frank's memory.

Organizers said that while the exact date of Anne's death is unknown, April 14 is a day before the anniversary of the liberation of Bergen-Belsen.

"We could have a minute's silence to mark Anne Frank's death, but it wasn't appropriate," Gillian Walnes, co-founder and executive director of the Anne Frank Trust, said.

"Anne Frank could not be silenced. Her voice has resonated across the generations in the 70 years since she died, and she's inspired people ... to actually speak out in her memory, and try to make the world better, as she wanted to do but couldn't do."

The Trust has put up diary extracts on its website. Members of the public can also pick their own passages.