Netanyahu: Israel will continue to thrive as long as we defend it

Two-minute Memorial Day siren sounded at 11 am throughout Israel in honor of over 25,000 fallen soldiers and terror victims; Netanyahu recalls brother's death.

Israel ground to a halt Wednesday morning to honor soldiers killed in the line of duty and civilians killed in terror attacks as part of Memorial Day – or the 'Day of Remembrance'. Israelis bowed their heads in silence for two minutes at 11 am as the annual Memorial Day siren sounded throughout the nation.

"Israel will continue to thrive as long as we continue to defend it from every front. I am sure we will successfully deal with every challenge, until we get to safety, until our region will change, but it could be a long process. We must continue to move forward," Netanyahu said. 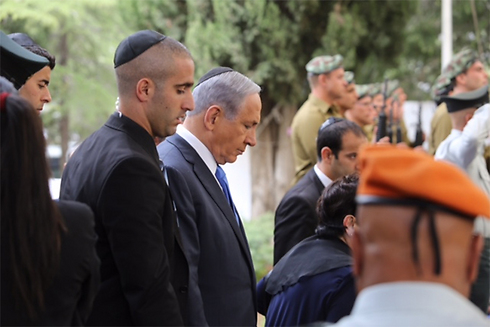 Netanyahu spoke of the death of his brother Yonatan Netanyahu, who was killed during Operation Entebbe in Uganda in 1976: "Bereaved familes speak of the knock at the door by the messengers who crushed their lives. I was the one who knocked on my parents door. It was the worst moment in my life."

"Just as an IDF widow said with a refined clarity last night – our enemies must know that they cannot break us. Despite the pain, we will continue to protect our nation. We will stay here." 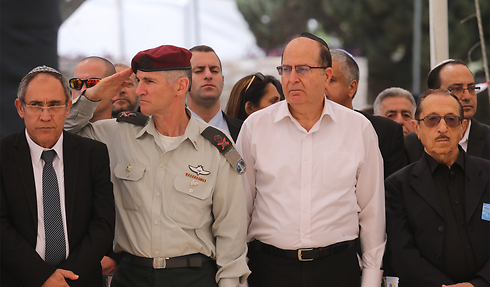 Speaking at the Tel Aviv ceremony, Defense Minister Moshe Ya'alon said that "Every fighter was a world onto themselves, and the pain of their passing is excruciating."

"For 67 years the State of Israel has struggled against those who seek its downfall, and pays, unfortunately, a heavy price. During this journey we lose the best we have. Our hands are extended for peace towards states and nations in the region, and whoever is honest with his intentions - his hand will not remain suspended in the air. But we will not be misled by divisive words and illusions.

"We must remember: There are many that have yet to come to terms with our right to a Jewish homeland, and they will do everything they can to deceive us and disrupt our lives with rockets and missiles, terror and de-legitimization – and in recent years with an attempt to develop a nuclear weapon."

"Just this past summer we accompanied 72 of the best in our nation, of them 67 IDF fighters and commanders, who fell during Operation Protective Edge protecting Israel's south. They did this with a sense of a higher calling and because they understood that there is nobody else who will protect the citizens of Israel."

Head of the opposition MK Isaac Herzog spoke at a ceremony in Ashkelon and said: "From our early days we have kept the principle that our forefathers dictated to us – one hand will always be ready on the trigger, to protect against any enemy, while the other hand will always extend towards peace."

Herzog added: "The search for peace is our moral duty to all those who risked their lives for Israel." 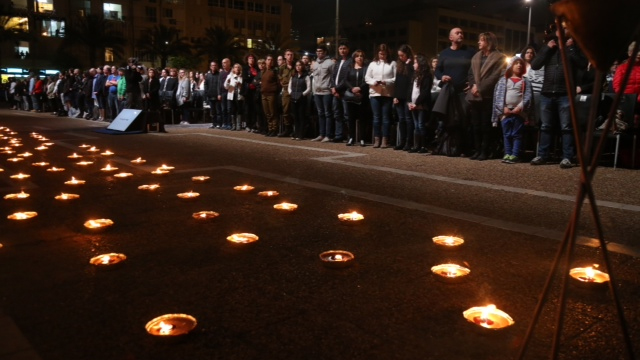 On Tuesday evening the first of the two Memorial Day sirens boomed over Israel's nationwide public announcement system, marking the beginning of hallowed day. Throughout the day, bereaved families will visit the graves of their loved-ones and hold private as well as public ceremonies, until Independence Day is ushered in at sunset.

In 1959, the Knesset passed a law ordering a two-minute nationwide siren and moment of silence on Israel’s Memorial Day and Holocaust Remembrance Day. 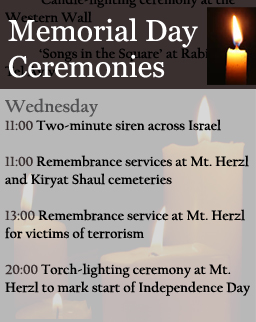 As every year, thousands of people attended Kiryat Shaul ceremony. Over the past month, the Defense Ministry's Families and Commemoration Department has been making preparations for the ceremony, which involves complex logistics and requires many rehearsals. 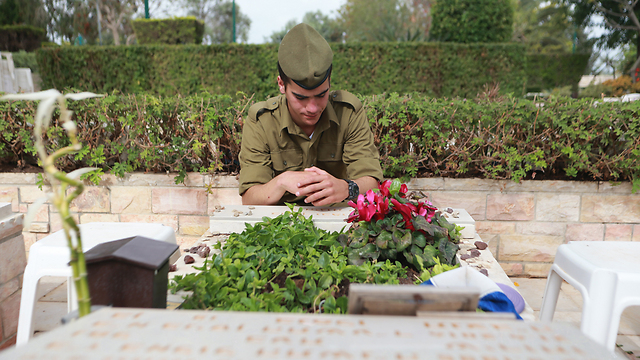 The Kiryat Shaul cemetery manager Lior Yamin urges Israelis to attend: "The entire nation is invited to the ceremony," Yamin said. "Thousands of people come and the parking lots get filled to the brim; the police gives us assistance." Shuttles are expected to pick up the families from the parking lots.

"We have been doing this for many years. We have the knowledge and experience to do it without any problems, and that is our goal for this year as well."

As of April 14 2015, Israel had lost some 23,320 of its sons and daughters, 116 of them in the last year alone – 67 of those soldiers killed during Operation Protective Edge. Some 35 wounded veterans passed away this year as a result of their injuries, and were thus also recognized as fallen soldiers, the Defense Ministry said. 2,538 people were killed in terror attacks since 1860.

Gilad Morag and Roi Yanovski contributed to this report