Auschwitz. 'The symbol of evil for the entire world'
Photo: AP 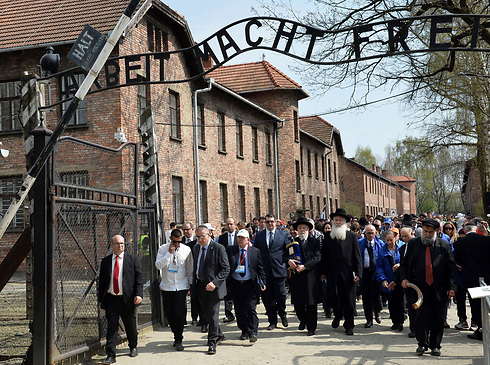 Visits to Auschwitz museum up 40% in first quarter of 2015

Due to growing attendance, authorities call on public to pre-book visits to former Nazi concentration and extermination camp on special website.

More than 250,000 people visited the former German Nazi concentration and extermination camp of Auschwitz in the first three months of 2015, a rise of more than 40% from the same period last year.

"The greatest change has so far been recorded in March," says Andrzej Kacorzyk, deputy director of the Auschwitz-Birkenau Memorial and Museum. "In 2014, 82,000 people visited the memorial site at that time. In March this year, this number amounted to 130,000 – nearly 60% higher. In previous years, such a high number of visitors was characteristic of the summer months."

On Trial
Former Auschwitz bookkeeper describes camp in chilling detail
Associated Press
'The capacity of the gas chambers and the capacity of the crematoria were quite limited. Someone said that 5,000 people were processed in 24 hours but I didn't verify this,' says Oskar Groening.
Former Auschwitz guard describes camp in chilling detail

In 2014, the memorial site was visited by 1,534,000 people in 2014. Never before had so many people seen the former camp area themselves during one year. It was also the highest attendance in the history of European memorial sites.

"Going through the Auschwitz-Birkenau space is not an easy experience for anyone," says Dr. Piotr M.A. Cywiński, the museum's director. "This authentic place has become the symbol of evil for the entire world, which is manifested by an over threefold increase in attendance, interest of the media, Internet statistics as well as over half a billion people throughout the planet who watched the 70th anniversary of the liberation of KL Auschwitz live on television.

"Current attendance made us – for various reasons, including security principles – change the rules of entering the former camp. Thanks to the rule of advance booking of the hour of visit, we can avoid congestion inside the former camp blocks and do not overload the existing infrastructure."

Due to safety reasons, conservation requirements, and in order to create the best possible conditions for learning about the history of the unique place, a strictly defined number of visitors can enter the former Auschwitz I camp in one hour and one group may not exceed 30 visitors.

"We already see that on particular hours, long waiting may be necessary in order to enter the former camp," Kacorzyk adds. "If the attendance continues to grow in such a dynamic way in the months to follow, it may result in the fact that not all people willing to enter the former camp and learn about the history of Auschwitz in its authentic space will be able to do it."

In view of the huge interest in the visit, a special website – visit.auschwitz.org – has been created to enable the booking of an individual visit of the museum, as well as a visit with an educator. Online booking is the only way which guarantees the entrance to the museum on a chosen day and hour.

Visitors also have to undergo safety control. "That is why we would like to ask all the people who have booked the visit to arrive at the museum at least 30 minutes prior to the beginning of the visit as well as to read the regulations available on the website," says Kacorzyk.