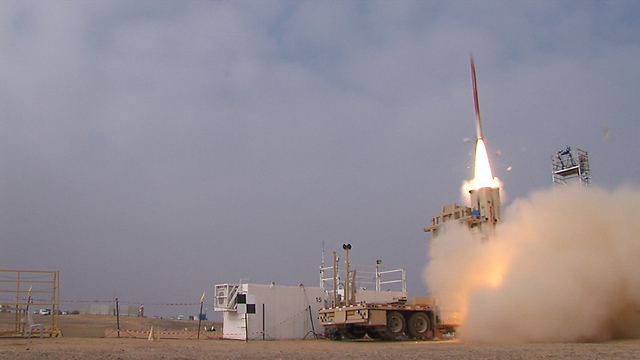 Israel's next war won't wait for a new IDF budget

Op-ed: If it were not for government foot-dragging, Israel would have already had an operational David's Sling system to counter Hezbollah's arsenal of heavy, accurate, long-range missiles.

Regardless of whether an agreement is signed between Iran and the world powers or not, Iran will increase its efforts to achieve regional hegemony in the Middle East in any event. For Iran this is also an intermediate objective, as it pursues global hegemony as the leader of the Muslim world. The Iranians have patience, a lot of patience.

The possibility of a conflict with Iran's Lebanese arm – Hezbollah – on the northern border remains on the agenda, and the recent incidents in Lebanon and Syria demonstrate that such a conflict is a reasonable possibility. We have already learned the hard way that our preparations should not be derived from the enemy's intentions, but from its abilities.

The high-trajectory weapons in Hezbollah's possession – more than 100,000 missiles and rockets – give Iran an offensive power against Israel, and it is uncertain that it will avoid using it. Hezbollah Secretary-General Hassan Nasrallah boasted recently that the Fateh-110 missile, which is capable of carrying a warhead of half a ton of explosives to any target in Israel with great accuracy, is not the most advanced missiles in his organization's possession.

According to a forecast presented recently by outgoing Home Front Commander Major-General Eyal Eizenberg, we are talking about some 1,500 missiles and rockets which will be fired into Israel every day during a conflict with Hezbollah. The amount of destruction to the Israeli home front in such a case could be huge, both in casualties and in property damage. Vital centers of industry, energy, transportation and medicine would cease operation, and not for a short period of time.

Some 4,500 rockets and missiles were fired at Israel during Operation Protective Edge. Thanks to the Iron Dome system's performance, they caused minor damage. But the total number of rockets launched during Protective Edge, which lasted 50 days, is equal to only three days of fighting against Hezbollah. Extensive destruction in the home front neutralizes the impact of victories on the battlefield.

Iron Dome is incapable of intercepting the heavy, accurate and long-range rockets. That is the purpose of a different system, David's Sling, which successfully completed its interception tests at the end of March.

If it were not for the Israeli government's foot-dragging, especially where budgets are concerned, we could have already had an operational David's Sling system today. Now the government must speed up the process of equipping itself with the interception system, which could defend the state against Hezbollah missiles with the same efficiency that Iron Dome defended the state against Hamas rockets. It's not a simple task, as the number of threatening rockets is immeasurably higher than the number of interceptors in the IDF's possession.

The David's Sling interceptors are much more expensive than the Iron Dome ones. We are facing a serious budgetary issue, which requires an unusual solution, without affecting the IDF's preparations for conflicts in other arenas. The first and simple option is to use for this purpose some of the money lying in the Treasury's coffers from the tax surplus reported in the media. Anyone capable of imagining the cost of rebuilding the destruction caused by a rocket attack realizes that the investment in David's Sling will pay off big time.

If the government won't want to allot enough shekels to finance efficient defense, there will be no other choice but to ask the American administration to include the full cost of the new interception systems' production in the annual military aid, which is mostly provided in dollars.

Today, the United States funds about two-thirds of the development of David's Sling. American company Raytheon is partner in the development, although the smart components – the homing, the radar, the control and supervision – come from the Israeli industries.

Time is a critical factor, so the government must give preference to a system capable of defending the state, the home front, the IDF facilities and the vital infrastructures. Without sufficient protection of the home front, the offensive options are uncertain too.

Brigadier-General (res.) Dr. Ephraim Sneh is a former deputy defense minister and the current chairman of the S. Daniel Abraham Center for Strategic Dialogue at the Netanya Academic College.