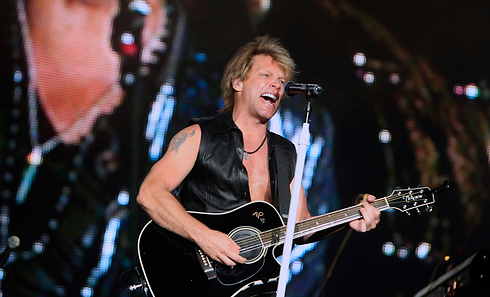 Bon Jovi in talks for summer gig in Israel

After announcing concert in 2010 and then cancelling, Ynet learns American rock band may finally be coming to Israel.

The summer's round of big concerts may soon add the name Bon Jovi to its list of famous names. Official sources in production told Ynet that early discussions have begun to bring the rock band to Israel in September, most likely to take place in Park Yarkon.

The Bon Jovi rock band was founded in New Jersey in 1983 and took the name of its singer Jon Bon Jovi.

Bon Jovi has released 11 albums, all of which sold millions of copies in the US and around the world. The band was nominated six times at the Grammy Awards in various categories and in 2007 won the award for best country band thanks to their single "Who Says You Can't Go Home."

Bon Jovi is responsible for the hits "It's My Life," "Living On A Prayer," and "You Give Love A Bad Name" just to name a few.

The band's last tour was in 2013 and it is currently unclear if the possible appearance in Israel would be part of a new tour.

The group announced plans to perform in Israel in 2010 as part of a tour to promote their album "The Circle." The plans never manifested to reality meaning that if Jon Bon Jovi performs this year, it will be his first concert in Israel.