Iraqi army takes over IS stronghold in Tikrit.
Photo: Reuters 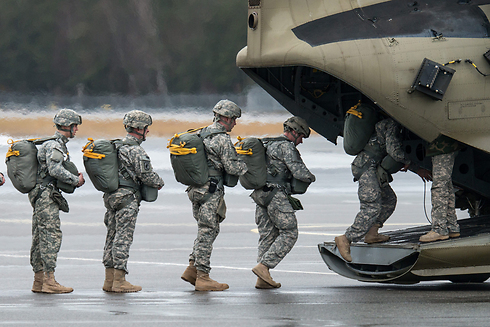 US commandos mounted a rare raid into eastern Syria overnight, killing a senior Islamic State commander and about a dozen others in a firefight, capturing his wife and rescuing a Yazidi woman held as a slave, the Pentagon said Saturday.

He said the wife Umm Sayyaf, who is now in US military detention in Iraq, "played an important role in ISIL's terrorist activities."

No US forces were killed or wounded during the operation, Carter said.

US commandos in Germany. (Photo: EPA)

"The operation represents another significant blow to ISIL, and it is a reminder that the United States will never waver in denying safe haven to terrorists who threaten our citizens, and those of our friends and allies," Carter said.

A US-led coalition has been striking Islamic State militants in Syria since last year, but this is only the second time troops have carried out a ground raid. A previous operation was aimed at rescuing Americans held hostage by the group.

The US National Security Council said Abu Sayyaf was a "senior ISIL leader who, among other things, had a senior role in overseeing ISIL's illicit oil and gas operations - a key source of revenue that enables the terrorist organization to carry out their brutal tactics and oppress thousands of innocent civilians."

"He was also involved with the group's military operations," it said.

"During the course of the operation, Abu Sayyaf was killed when he engaged US forces," Meehan said.

The ISIS leader was a Tunisian national designated by ISIS as the organization's "emir of oil and gas," according to the US official.

"The president authorized this operation upon the unanimous recommendation of his national security team and as soon as we had developed sufficient intelligence and were confident the mission could be carried out successfully and consistent with the requirements for undertaking such operations," Meehan said.

Meehan said the operation was conducted "with the full consent of Iraqi authorities" and "consistent with domestic and international law".

The statement also said the commandos rescued a young Yazidi woman "who appears to have been held as a slave" by the slain militant and his wife. ISIS militants captured hundreds of members of the Yazidi religious minority in northern Iraq during their rampage across the country last summer.

Meehan said that US personnel based out of Iraq conducted the operation in al-Amr in eastern Syria.

A US defense official said the raid was conducted by a team of Army Delta commandos who flew from Iraq into eastern Syria aboard V-22 Osprey aircraft and Blackhawk helicopters.

Upon arrival at the target, which was a multi-story building, the Americans met stiff resistance. A "fairly intense firefight" ensued, including hand-to-hand combat, said the official, who spoke on condition of anonymity because he was not authorized to discuss details of the raid by name.

The US estimates that about a dozen ISIS fighters were killed but no civilians were wounded, even though women and children were present. The Americans returned to their base unharmed by about midnight Washington time.

Syrian state media reported earlier that government forces killed at least 40 Islamic State fighters, including a senior commander in charge of oil fields, in an attack Saturday on the country's largest oil field - held by ISIS. It identified the commander as Abu al-Teem al-Saudi.

The Syrian report, which appeared as an urgent news bar on state TV, was not repeated by the state news agency. State TV didn't repeat the urgent news or elaborate on it.

It was not immediately clear why both Syria and the US would claim a similar operation in the Omar oil field. The US has said it is not cooperating with President Bashar Assad's government in the battle against the Islamic State group.

"The US government did not coordinate with the Syrian regime, nor did we advise them in advance of this operation," said White House National Security Council spokeswoman Bernadette Meehan.

"We have warned the Assad regime not to interfere with our ongoing efforts against ISIL inside of Syria," she said, using an alternative acronym for Islamic State. "As we have said before, the Assad regime is not and cannot be a partner in the fight against ISIL. In fact, the brutal actions of the regime have aided and abetted the rise of ISIL and other extremists in Syria."

Rami Abdulrahman, who runs the Britain-based Syrian Observatory for Human Rights, said the Assad regime had incorrectly taken credit for the raid.

The Observatory confirmed an oil field attack, saying at least 19 ISIS members, including 12 foreigners, were killed. The group did not say who carried out the attack.

The Islamic State controls much of northern and eastern Syria as well as northern and western Iraq. It has control of most of the oil fields in Syria, which are a key source of its funding. It has declared a caliphate in the territories under its control and governs them under a harsh version of Islamic law.

The special operation was announced as IS fighters were advancing in central and northeastern Syria. The militants are nearing the historic city of Palmyra, in the central province of Homs, and have seized as water facility and an oil field on the city's eastern outskirts, activists said.

The advances in the Palmyra countryside were coupled with an announcement Saturday by the Islamic State group that its fighters have seized full control of Saker Island in the Euphrates River north of Deir el-Zour, the northeastern province divided between areas held by the group and the government.