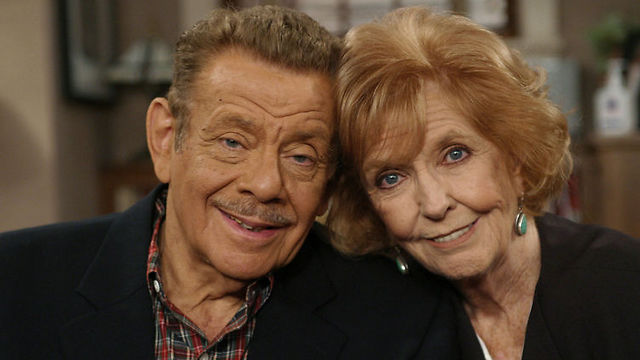 Jewish actress gained fame as half of comedy team Stiller & Meara with her husband, Jerry Stiller; she also appeared in dozens of films and TV shows, including 'All My Children', 'Sex and the City' and 'The King of Queens'.

Actress and comedian Anne Meara, whose comic work with husband Jerry Stiller helped launch a 60-year career in film and TV, has passed away Saturday at the age of 85.

Her husband, Jerry Stiller, and son Ben Stiller released a statement to The Associated Press on Sunday describing Jerry as Meara's "husband and partner in life."

"The two were married for 61 years and worked together almost as long," the statement said.

The couple performed as Stiller & Meara on "The Ed Sullivan Show" and other programs in the 1960s and won awards for the radio and TV commercials they made together.

Meara also appeared in dozens of films and TV shows, including a longtime role on "All My Children" and recurring appearances on "Rhoda," ''Alf," ''Sex and the City" and "The King of Queens." She shared the screen with her son in 2006's "Night at the Museum."

Meara was twice nominated for an Emmy Award for her supporting role on "Archie Bunker's Place," along with three other Emmy nods, most recently in 1997 for her guest-starring role on "Homicide." She won a Writers Guild Award for co-writing the 1983 TV movie "The Other Woman."

Besides Jerry Stiller and Ben Stiller, Meara is survived by her daughter, Amy, and several grandchildren.

The family statement said: "Anne's memory lives on in the hearts of daughter Amy, son Ben, her grandchildren, her extended family and friends, and the millions she entertained as an actress, writer and comedienne."